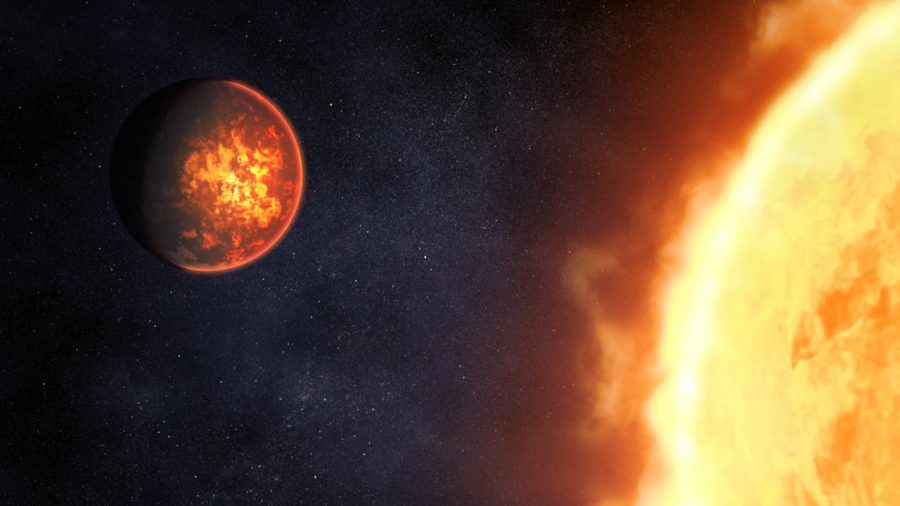 Imagine a world that burns ceaselessly and eternally, with fires that burn forever.

Finally, getting a glimpse of a world like that is not as far-fetched as we think anymore.

For the first time, NASA astronomers will soon be able to get a glimpse of this distant world that constantly burns using the James Webb Space Telescope.

This distant “Super-hot Super-Earth” is 55 Cancri e, an exoplanet or a planet that orbits a star beyond our solar system. It is called a Super-Earth, which is a class of planets that are potentially rocky, more massive (twice or up to 10 times) than Earth, yet lighter than our ice giants like Uranus and Neptune.

55 Cancri e, also commonly known as Janssen, orbits from its Sun-like star called Copernicus less than 1.5 million miles and only 41 light years away. So, this Super-Earth is just 1/25th (or 4%) of the distance between the Sun and Mercury compared to our solar system. Also, it only takes 18 hours for this planet to finish a full rotation around its star, or complete what we would call an entire year. In comparison, our planet Earth takes about 365 days to go around our sun during a full year.

This is why scientists believe the day side of this Super-Earth is molten or covered in lava oceans, and the clouds rain lava, as its surface temperatures are way above the melting point that is high enough to melt rock. This makes the surface of 55 Cancri e completely uninhabitable, with its temperatures reaching 4,417 degrees Fahrenheit. It could be like the biblical description of Hell: A dimension that is ever-burning.

It was always assumed that planets that orbit so close to their star are tidally locked, meaning it revolves or orbits around their star with one side facing it at all times. So it’s always day (constantly burning sunlight) on one side, and on the other side, it’s eternal night. As a result, the side always facing the star should be the hottest spot, but this doesn’t seem to be the case for 55 Cancri e.

Instead, observations made by NASA’s Spitzer Space Telescope of 55 Cancri e point out that the hottest spot of the planet is the side that is not directly facing the star.

One theory made by NASA scientists suggests that 55 Cancri e has a “dynamic atmosphere that moves heat around” and could have a “thick atmosphere dominated with nitrogen or oxygen.” Hence, it’s carrying the heat with it.

Another intriguing theory suggests that Cancri e rotates like Mercury, creating a day-night cycle. According to NASA, “In this scenario, the surface would heat up, melt, and even vaporize during the day, forming a very thin atmosphere that Webb could detect. Then, in the evening, the vapor would cool and condense to form droplets of lava that would rain back to the surface, turning solid again as night falls.”

“That could explain why the hottest part of the planet is shifted,” NASA says. “Just like on Earth, it would take time for the surface to heat up. The hottest time of the day would be in the afternoon, not right at noon.”

Uncovering the mysteries about 55 Cancri e will help scientists better understand Earth-like planets and learn what the early Earth might have been if it was as hot as these planets.

The James Webb Space Telescope will be fully operational in the coming weeks, and its first observations will be revealed this summer. Its first year will be committed to studying 55 Cancri e and LHS 3844 b, an airless Super-Earth exoplanet orbiting the red dwarf LHS 3844.

What are your thoughts about this? Please comment down below.