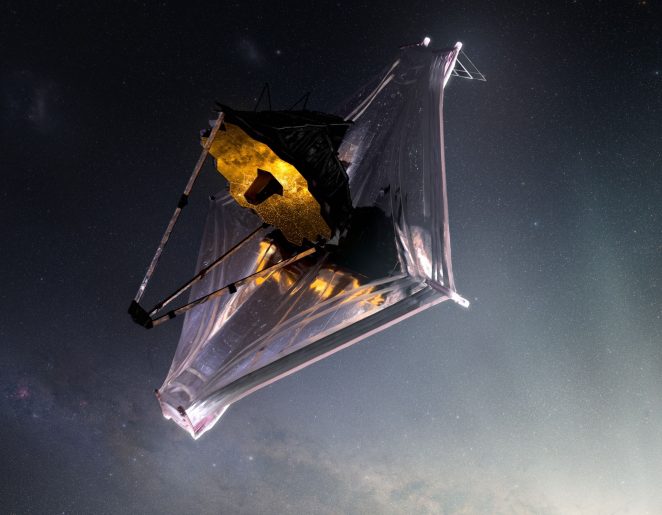 After 25 years of development, the James Webb Space Telescope aboard an Ariane 5 rocket was launched into space from Europe’s Spaceport in French Guiana on December 25th, 2021. What an unprecedented breakthrough for astronomy!

The James Webb Space Telescope, also referred to as Webb or JWST, is the largest, most complex, and powerful telescope NASA has ever sent into space. It is a 20-year impressive project collaboration between the National Aeronautics and Space Administration (NASA), the European Space Agency (ESA), and the Canadian Space Agency.

It will orbit the sun, nearly 1.6 million kilometers (about 1 million miles) away from Earth and will hover around what is called the second Lagrange point (L2), which is about four times further than the Moon is from the earth. Lagrange points are areas in space where the gravitational force on an object is balanced by the force generated when it is orbiting another object. This creates a nice sweet spot that allows it to hover in one spot more easily. It allows the Webb telescope to stay in one area instead of needing to always orbit the earth.

The James Webb Space Telescope is an infrared telescope, meaning it will use infrared radiation, or a form of heat to detect objects in space. You can sort of think of this space telescope as giant night vision goggles.

Given that light takes much longer to reach Earth from deep space (billions of years!), the light emitted by the earliest galaxies or stars created becomes so stretched that it finally arrives here as infrared, which is heat. The reason light gets stretched has to do with observations that our universe is expanding all the time. Einstein showed that light always travels at the exact same speed, even if the light source is moving away or towards an observer. Light also behaves like waves you see moving on the ocean. The number of waves you see that pass a fixed point in one second is called the frequency, and the wavelength is the distance between two repeating wave crests. Light changes color to our eyes based on frequency, with colors like red and infrared (heat) being much slower. There is a well known formula that relates the speed of something to the frequency it creates: Frequency X Wave Length = Speed of Light. Since the speed of light cannot change, what does change when the universe expands is the length of each wave. Longer waves have a slower frequency.

Distant celestial bodies have almost no temperature by the time their heat gets to us, just like a candle feels less hot if it is further from you. However, the James Webb telescope will be able to see and capture them because it is sensitive to the slightest amount of heat. Remember that light from very deep space objects turns into heat over time, so we will be able to “see” them in infrared even though that original light could never be be seen with our eyes.

The telescope is equipped with 18 hexagonal segment gold-plated mirrors that are designed to collect infrared light, which NASA essentially calls “light buckets.” Its primary mirror measures about 21 feet and 4 inches or 6.5 meters across, while the secondary mirror is about 2.4 feet or 0.74 meters across.

After seeing the photo, you might be wondering why the James Webb Space Telescope looks like a giant honeycomb. Well, it is because the iconic honeycomb pattern allows the mirror pieces to fit together at their edges. Since hexagons pack together nicely, it creates a powerful unit and will have a larger surface area to collect more light. It also makes the unit foldable, allowing it to fit inside the rocket for the launch. When the telescope reaches its destination, it will unfold similar to the way origami work.

As for the reason why the mirrors are gold, it’s because gold is a great reflector of infrared light.

To see or detect infrared light, the telescope must remain cold and be kept at an extremely cold temperature – about -370 degrees Fahrenheit or lower. That’s why it has a five-layer sun shield as big as a tennis court underneath it to protect the probe. The sun shield will block out heat from the sun, the Earth, and the Moon in order to keep the telescope’s instruments cold.

One of the telescope’s instruments is the Near Infrared Camera (NIRCAM), which is equipped with coronagraphs or instruments that enable astronomers to take images by blocking out the light of a star. It will allow astronomers to see what is happening around more clearly and make viewing of a dimmer object nearby possible.

The telescope will help us see through the dust clouds where new stars and planets are born, capture images of the first galaxies and stars that are invisible to the naked eye, and examine other distant celestial bodies, including exoplanets, galaxies, black holes, red dwarf stars, and many more.

Imagine finally getting a glimpse of those!

According to NASA, the scientific goals of the JWST will be grouped into four themes: The first light that shone in the universe after the end of the Dark Ages, the assembly of the earliest galaxies, the birth of stars and new planet formation, and the study of origins of life and other planetary systems, including our own solar system.

And since the JWST is specifically designed to look further back into deep space, over 13.5 billion light-years away, with unparalleled precision, we’ll not only be able to look farther out into space, but we’ll also be able to look further back in time than ever before and see the first era of galaxies that were born after the Big Bang. It gives us an even closer look at the origin of our universe.

The telescope will also help shed some light on some of the biggest unanswered questions, like how the first galaxies are formed, where we come from, and whether life could exist in other worlds.

So that’s James Webb Space Telescope in a nutshell! Here are some fun facts I would like to share with you about the recently launched telescope.

Here is the first deep field infrared image that was taken in a tiny area of space that only had a few stars visible with normal telescopes. If you held a grain of sand at arms length, that piece of the sky is the image below! Just 100 years earlier we only thought there was one galaxy in the universe. It is absolutely amazing. Computer coloring was used to enhance the image.

What did you find most interesting about the recently launched James Webb Space Telescope? Comment with your answers below!