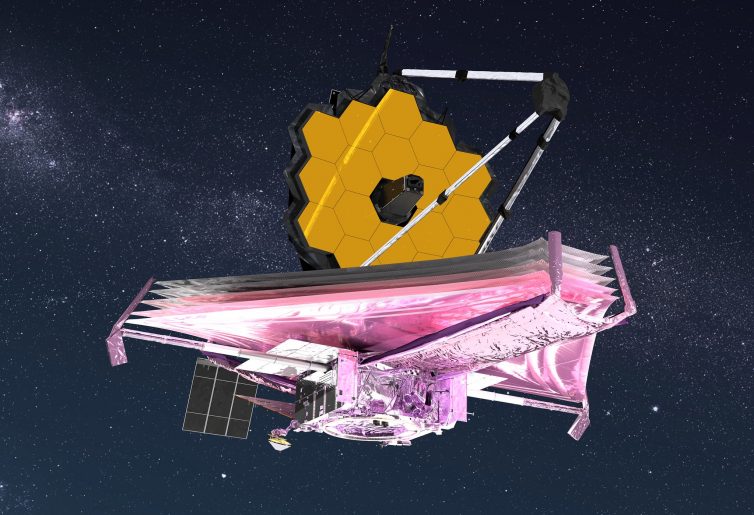 On July 12, 2022, NASA released the long-waited first set of full-color images taken by the James Webb Space Telescope (JWST)—the largest and most powerful space telescope ever built and launched into space.

It marks a momentous day for science, beginning a new era in astronomy.

As a recap, James Webb Space Telescope (JWST) was launched into space on December 25, 2021, and it took six months in orbit to fully prepare and calibrate Webb’s instruments.

During a live broadcast, the world got its first glimpse of the wonders that lie beyond our Universe after decades of waiting. And it’s worth the wait!

NASA and astronomers unveiled four images taken by the Webb telescope, delivering an unprecedented look at the early Universe and its past, and they’re absolutely stunning!

Without further ado, here’s a sneak peek at the first images of the early Universe.

The first-ever image was revealed by President Joe Biden on July 11, 2022 during a White House event. It unveiled the galaxy cluster SMACS 0723, which was hailed as “the deepest and sharpest infrared image of the cosmos ever taken.” It was also known as Webb’s First Deep Field or the first operational image. It only took less than a day for Webb to capture this image. How amazing is that?

The image of galaxy cluster SMACS 0723 shows the thousands of galaxies and multiple arcs, including the most distant celestial bodies, as they appeared 4.6 billion years ago. It can be seen about 5.12 billion light-years away from Earth’s Southern Hemisphere within the constellation of Volans (the constellation in the southern sky representing a flying fish). What was shown in the image covers only a small patch of sky, about the size of a grain of sand, held by someone at arm’s length on the ground. Imagine how tiny that galaxy cluster is to our vast Universe!

You might’ve noticed that some of the galaxies appear bent. This is because the combined gravity of the massive group of galaxy clusters magnifies and bends the light rays from the background objects, bringing the distant galaxies behind it into view. It simply acts as a “gravitational lens” or a magnifying glass.

You can see the impressive difference between the two, with Webb Space Telescope’s new image being brighter and sharper. It has also captured more details than Hubble, showing faint structures like star clusters and diffuse features that have never been seen before.

The second image shows a detailed transmission spectrum of the hot gas giant exoplanet, WASP-96 b, which is about 1,150 light-years away from Earth. This exoplanet can be found in the southern-sky constellation Phoenix. It orbits close to its Sun-like star, which is why its temperature is greater than 1000 degrees Fahrenheit.

The graph shows the information gathered about the makeup or the characteristic signatures of specific elements of the WASP-96 b’s atmosphere. Observations reveal signatures of water and evidence of haze and clouds in the atmosphere surrounding this planet, which was once thought not to exist there.

Next is the Southern Ring of Nebula, also known as Eight-Burst and cataloged as NGC 3132, which is approximately 2,500 light-years away. It’s called a planetary nebula, but it’s not actually a planet. Instead, it’s giant shells of gas and dust shed by dying Sun-like stars.

The image shows the Southern Ring of Nebula, along with two stars in the center of the nebula that they call “star-crossed lovers.” The dimmer dying star at the center is seen expelling rings of gas and dust. The dying star is locked tight in orbit with a younger, brighter star that is at the earlier stage of its stellar evolution

The Webb Space Telescope helped reveal for the first time that the dying star is cloaked in dust. As the two stars continue to orbit one another, they would stir the shells of gas and dust, resulting in the asymmetrical patterns seen in the image.

Capturing this image of the Southern Ring of Nebula will allow astronomers to better understand other planetary nebulae like this one.

This captured mosaic is Webb’s largest image to date, covering 1/5 of the Moon’s diameter (as seen from Earth). In addition, it comprises more than 150 million pixels and is created from about 1,000 image files.

This new information helps astronomers know more about the interactions between galaxies and how this phenomenon triggers star formation in each other, which is vital to galaxy evolution.

Lastly is the breathtaking image of the Carina Nebula, a stellar nursery about 7,600 light-years away from Earth. It’s also one of the brightest and largest nebulae in the sky. A stellar nursery is a cloud of contracting gas and dust where new stars are born.

Webb’s image shows the “Cosmic Cliffs” of the Carina Nebula, the cloud-like nebula structure that looks like a mountain range because of the valleys, ridges, and peaks. However, what looks like a mountain range landscape sprinkled with glittering stars is actually the edge of NGC 3324, a nearby, young, star-forming region in the Carina Nebula. Its tallest peaks reach 7 light-years high.

According to NASA, “The cavernous area has been carved from the nebula by the intense ultraviolet radiation and stellar winds from extremely massive, hot, young stars located in the center of the bubble, above the area shown in this image.” And the “steam” you see rising off the “mountains” is actually hot gas and dust.

This stunning image of Webb uncovers the birth of stars previously hidden in a new level of detail. This will also help provide a new understanding of the star formation process.

These images only preview the Webb Space Telescope’s remarkable full capabilities, and that’s just the beginning. Imagine what other amazing images we would get to see in the future!

The Webb Space Telescope is expected to last about 10 years for its mission, but recent developments have stated it has enough fuel capacity to work for 20 years.

Webb will also shed light on our solar system’s mysteries after the end of the Dark Ages, probe the mysterious study of the origins of life and other planetary systems, and learn more about the assembly of the earliest galaxies and the birth of stars and new planet formation.

What are your thoughts about this? What did you find most interesting about the first images of the James Webb Space Telescope? Comment with your answers below!