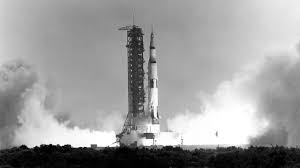 BAM! Suddenly, the master alarm in the lunar module (LM) rang out for attention with all the racket of a fire bell going off in a broom closet. “Program alarm,” astronaut Neil Armstrong called out from the LM in a clipped but calm voice. “It’s a twelve-oh-two.”

Translation: We have a problem! What is it? Do we land? Do we abort? Are we in danger? Are we blowing up? Tell us what to do. Hurry!

Back in Mission Control, the words TWELVE OH TWO tumbled out of the communications loop. The weight of the problem landed with a thud in the lap of 26-year-old Steve Bales.

A voice in another loop- belonging to one of Bales’s backroom support guys, 24-year-old computer whiz Jack Garman- burst in to make sure he was aware of the 1202 alarm code. A quick glance at the master list told him that 1202 meant executive overflow. Simply put, the computer had too much to do. But by their very definition, this kind of alarm was built into the program only to test the software, and should never happen in flight.

Yet there it was: 1202. An unreal reality. First, stunned inactivity, then a bombardment of thoughts.

What’s the problem? Do they land? Do they abort? Are they in danger? Are they blowing up? Tell them what to do. Hurry!

Gene Kranz (you may remember him) plucked details from a flood of incoming information.

“The astronauts had no idea what these alarms were,” explained Jack Garman. “Absolutely no idea. These alarms were software development alarms. They’d never seen them. Never studied them. Never had them. No one in Mission Control knew what they were. Not Kranz or anybody.”

Steve Bales determined that the computer had not lost track of the lunar module’s altitude, speed, and guidance control, which were critical to avoid a crash landing. They were okay, for now.

Their voices were rapid-fire. Crisp Assured. There was no hesitation.

But now there was a new threat.