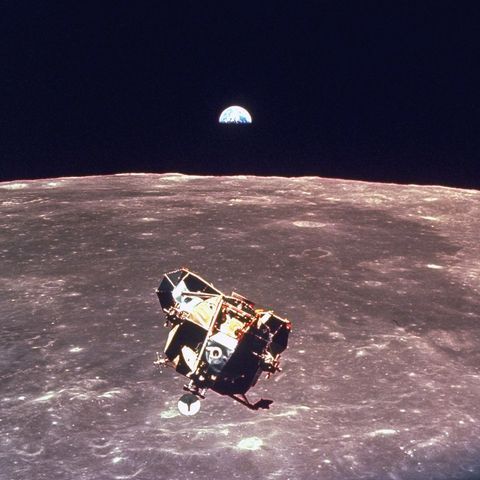 Not 61. No wiggle room. No “just a couple more seconds, we’re almost there>” and no second chances. They had sixty seconds to land on he moon.

Absolutely no one expected it to happen. They had painstakingly planned it so it absolutely wouldn’t-couldn’t happen. But here they were, less than five hundred feet from the moon, and just about plumb out of fuel!

Both Neil and Buzz knew when they heard the words “sixty seconds,” that it was how much time remained until they had to abort. Until they had to push the button and fling themselves away from the moon; never to land, or else, they could possibly die.

The heavier the spacecraft, the harder it is to launch. And fuel is heavy. So it was critical to pinpoint the exact amount of fuel needed, and take no more than that amount. But now, because the landing was taking far longer than planned, the fuel was almost gone.

But if they did land, leaving the moon wouldn’t be a problem because there was a tank full of fuel for the ascent stage upon liftoff. But the ascent and decent stages were completely separate. When the supply for the decent stage was empty, that was it. Sharing fuel was not an option.

A certain Bob Carlton watched his stopwatch. Now would not be the time for him to miscalculate, miscount, or lose his power of concentration. He could not afford to be wrong.

“When we tripped low level, things got really quiet in the Control Center,” he later recalled. “We were nervous, sweating.  Came to sixty seconds, came to thirty seconds, and my eyes were just glued on the stopwatch. I didn’t see the Control Center as a whole. The system could have fallen apart at that instant, and I wouldn’t have known it. I was just watching the stopwatch.”