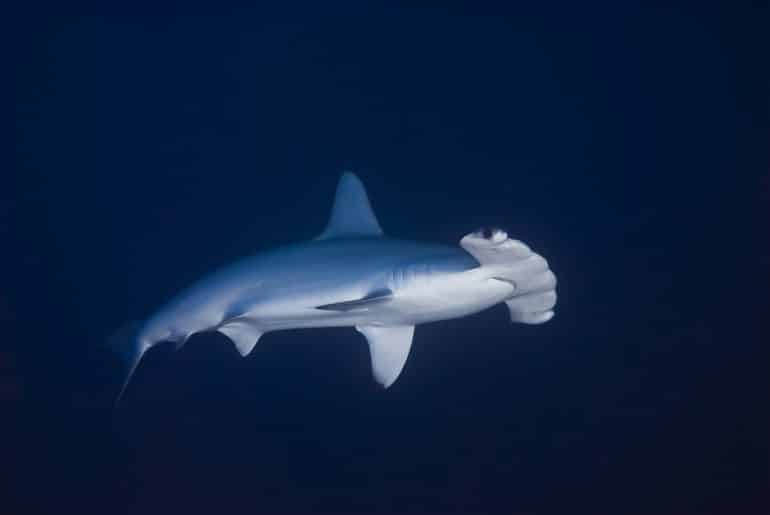 More than 500 shark species are in our planet’s oceans, and they come in different colors, shapes, and sizes. And I must say, the hammerhead sharks are perhaps one of the most peculiar yet cool-looking of all sharks.

Hammerhead sharks, also known as sphyrnids, are cartilaginous fishes that belong to the family Sphyrnidae and the genus Sphyrna. The word Sphyrna originated from the Greek word that means hammer.

They are well-known for their distinctive head structure, which is classically ‘hammer-shaped’, hence the common name. The head’s outward extensions that create the hammer shape are known as cephalofoil. Another distinct characteristic of hammerhead sharks is their eyes, which are placed on the sides of the head.

Generally, hammerhead sharks reach about 3 to 20 feet long and weigh 300 to 1000 lbs. Their skin usually ranges from shades of white, brown, gray, and olive green with white undersides. On average, they also live quite long, often lasting 20 to 30 years. Although, some studies have observed that this shark species live longer than 35 years.

Another interesting thing about hammerhead sharks is that they are viviparous. This means that although they are fish, they give birth to live young instead of laying and hatching eggs. The offspring come from the fertilized eggs developed inside their bodies. The birth usually happens during the spring and summer.

The positioning of the eyes, which are placed on the sides of the ‘flattened hammer,’ enhances the hammerhead shark’s vision. This provides the sharks with a wider field of view, seeing what’s above and below them at all times. It also helps them monitor what’s behind them as they move their head sideways while swimming.

In addition, the placement of the eyes allows the hammerhead sharks to have an almost panoramic vision with the slightest movement. This means they can view large areas.

Another function of the hammerhead shark’s bizarre head is improving sensory perception. Like all sharks, hammerheads have electroreceptors or sense organs called ampullae of Lorenzini.

These are sensory pores that detect the electrical impulses of prey. However, hammerheads have more of these electrosensory pores than other sharks. They are spread over the wide underside of the head.

The “ampullae of Lorenzini” acts like a metal detector that helps in sensing and pinpointing prey, which is usually hidden under the sand.

The shape of the head of hammerhead sharks is also believed to support maneuverability. This allows the shark to sharply turn its head or move in an opposite direction without losing stability. The head’s peculiar structure also helps the shark to stabilize its body as it turns when snapping its prey or fleeing from danger.

However, these mentioned purposes are only hypotheses and have yet to be officially proven. It would need more studies and detailed observations to ensure the advantages of hammerhead sharks’ heads are substantiated.

What are your thoughts about this? Do you have other fun facts about Hammerhead sharks? Comment down below and share it with others!