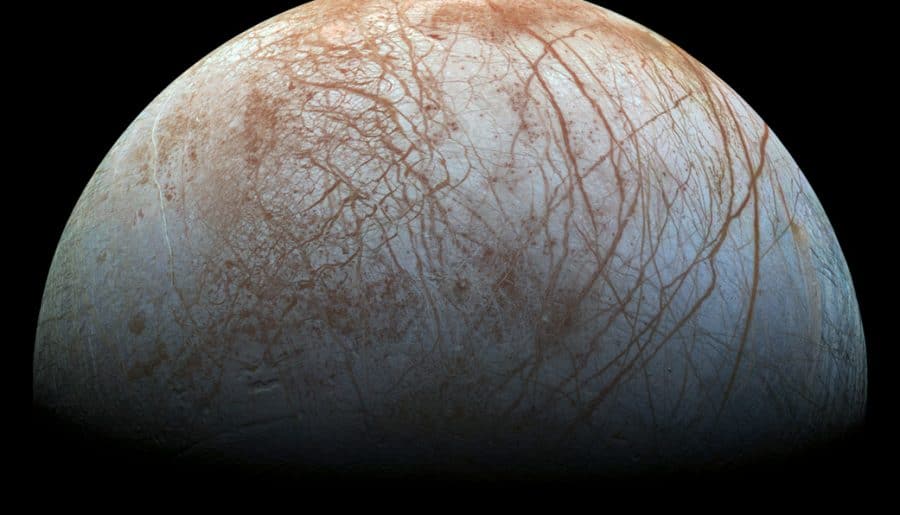 Wouldn’t it be amazing if there’s another place aside from Earth that could harbor life?

Well, this idea might not be as far-fetched as we think.

Scientists have recently discovered a promising place that may have water where life could exist: Jupiter’s moon Europa.

A recent study published in Nature Communications proclaimed that Jupiter’s moon Europa might be a prime candidate for habitability in our solar system. It means life may occur outside Earth.

Europa, also known as Jupiter II, is the smallest Galilean moon out of the four orbiting Jupiter. Galilean moons are the original largest ones discovered by Galileo Galilei around 1609 and include Io, Europa, Ganymede, and Callisto. Europa is also the sixth-closest moon to Jupiter out of all the planet’s 79 known moons, and the sixth-largest moon in our solar system.

Europa’s surface is covered with an ice crust measuring 15 miles or 20 kilometers thick and is marked (looks like scars) with crisscrossing giant double ridges, or pairs of parallel raised lines. These double ridges have crests (about 305 meters high) with broad valleys. The most amazing part is that beneath Europa’s thick icy shell exists a saltwater ocean, which is estimated to be 40 to 100 miles deep!

For more than 20 years, scientists have been studying this moon’s icy surface. Now, evidence from an analysis of satellite images revealed that Europa’s double ridges are impressively similar to the double-ridge feature discovered in Northwest Greenland’s ice sheet. They used ice-penetrating radar observations and surface elevation to observe this uncanny resemblance between the two icy sheets.

The recent discovery led the scientists to question whether Europa’s double ridges were also formed similarly to Greenland’s ridges. This process happens when the subsurface water is pushed upwards, which fractures the surface and freezes over and over again. The upsurge of water is what pushes the ridges on the surface. The upsurge’s pressure is similar to when a soda can explodes after being put in the freezer for a long time.

If the theory is correct, it would mean Europa might also have water pockets, which are a key ingredient in helping chemicals essential for life to circulate in the moon’s ocean.

Finding these promising water pockets will be one of the important future explorations for Jupiter’s moon Europa.

NASA will conduct a mission called Europa Clipper to uncover the mysteries of this Jovian moon. It will investigate further how the double ridges are formed, look for the important water pockets, and collect data on the thickness of Europa’s icy crust. The Europa Clipper spacecraft will use ice-penetrating radar for the mission.

NASA’s Europa Clipper will also explore the possibility of Europa’s conditions being suitable for life. This mission is expected to launch in October 2024.

Another upcoming mission called the European Space Agency’s Jupiter Icy Moons Explorer (JUICE) will also head for Europa, which is planned to launch in 2023. It will make detailed observations of the planet Jupiter and its three largest moons, Callisto, Europa, and Ganymede.

What are your thoughts about this? Do you think life exists on Europa? Please comment down below with your answers.