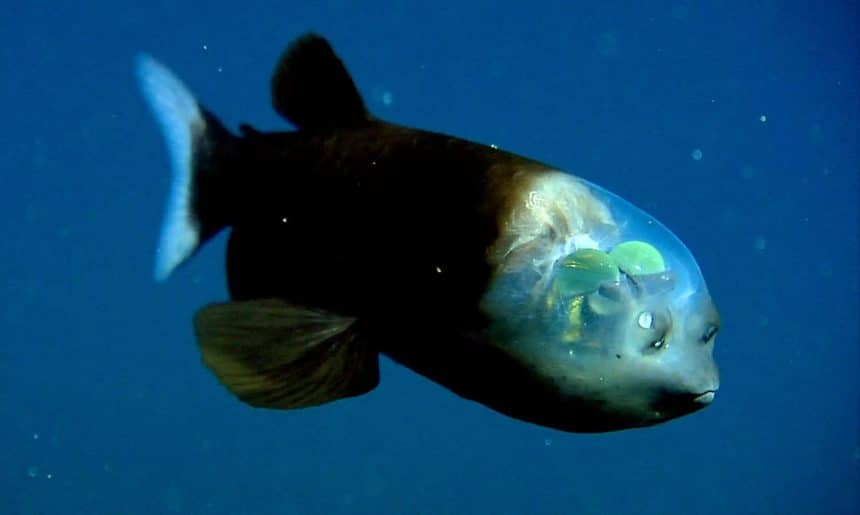 The oceans on our planet hold such great mysteries within their depths. There’s a whole different world down below, and so many strange yet remarkable sea creatures lurk in the deep.

And one of the most otherwordly sea creatures considered by biologists is a fish with a transparent head.

Yes, you read it right. A fish with a see-through head!

Barreleye fish, also known as Macropinna microstoma, is a species of deep-sea fish that lives in the tropical-to-temperate waters of the northeastern Pacific Ocean. The other common name for Barreleye fish is spookfish.

This deep-sea fish dwells in the twilight zone, about 2,000 to 2,600 feet below the ocean’s surface. The ocean twilight zone is the depth where it’s beyond the reach of sunlight.

Barreleye fish is well-known for its peculiar feature: its dome-shaped transparent head exposing its brains and barrel-shaped glowing green eyes. It earned its nickname, Barreleye fish, because of its distinctive barrel-shaped eyes. This deep-sea fish grows quite small, usually only about 6 inches long, and weighs between 2 and 5 oz.

What’s interesting about the Barreleye fish is its glowing green tubular eyes. Scientists initially believed that its eyes were fixed upwards (looking only above the fish’s head). However, it was found in 2009 that it could rotate its eyes. This mechanism helps the Barreleye fish to search for prey, detect and track its faint silhouette, and see it while eating.

Its tubular eyes are also extremely sensitive to light and are excellent at collecting light. The eye’s green pigment acts as sunglasses that filter out sunlight from the ocean’s surface. It also helps the Barreleye fish differentiate between sunlight and bioluminescence, or the glow emitted by living organisms.

And for better vision, its dome-shaped transparent head allows the eyes to collect more light. It also protects the organs inside, as it comprises a fluid-filled shield covering the head.

Another interesting feature of the Barreleye fish is its large, flat fins that allow this deep-sea fish to stay almost motionless in the water, then move very precisely.

Scientists believe that the Barreleye fish remain completely still while waiting for its potential prey, like jellyfish and zooplankton. Once it spots its prey, it hovers its way toward it thanks to the broad, flat fins.

They also think that the transparent fluid-filled shield in front of its head helps protect the Barreleye fish’s eyes from the stinging tentacles of siphonophores when they steal food caught in its tentacles. Siphonophores are marine animals that are relatives of corals and jellyfish. But again, this is just speculation.

Barreleye fish was first described in 1939, and marine biologists have long studied them. However, so little is still known about them. As of today, there’s still much to learn about the Barreleye fish because they’re quite rare. Its fragile shield also often gets damaged when the deep-sea animal is brought up from the deep, making their observation of them more challenging.

What are your thoughts about this? Do you have other fun facts about the Barreleye fish? Comment down below and share it with others!