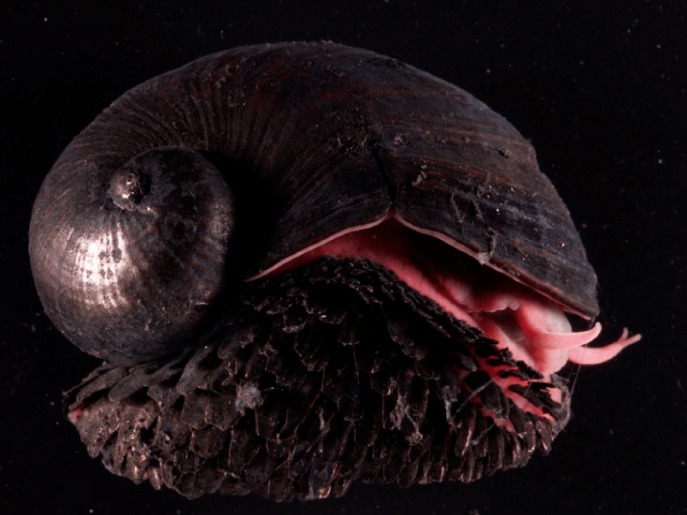 Snails are well-known for one of their striking physical features—the spiral shell they load on the back. But have you ever heard of a snail with a shell made out of iron?

If you haven’t yet, let me introduce this remarkable creature, the Scaly-foot snail.

The scaly-foot snail’s habit is quite extreme. It’s a vent-endemic gastropod, meaning it’s known only to live in three locations near the deep-sea hydrothermal vents in the Indian Ocean. The three hydrothermal vents are Kairei, Longqi, and Solitaire vent fields.

Hydrothermal vents are fissures on the seafloor that releases seawater heated by molten rock deep below the Earth’s surface. (Imagine hot springs or geysers on the ocean floor.)

Here is an image of the three Chrysomallon squamiferum species found in the three hydrothermal vent fields.

The differences in the colors between the three scaly-foot snail species are noticeable. It varies depending on the different chemical compositions in the hydrothermal water at each vent field.

Scaly-foot snails are often found on mid-ocean ridges near volcanically active areas, about 2,400–2,900 meters deep. It can even withstand the high temperatures of the deep sea hydrothermal vents, about 572 degrees Fahrenheit. Hence the common name volcanic snail.

What’s incredible about this snail is its shell’s unique construction, which has three layers. This protects the snail against predators like venomous snails or crabs.

The outermost layer has iron sulfides (it incorporates iron into its exoskeleton shell). In contrast, the middle layer has organic periostracum or a thin, organic coating mostly found in other gastropods. And the shell’s innermost layer is a calcified material made of aragonite.

The snail’s foot is large, and its sides are armored with hundreds of overlapping iron-mineralized sclerites. A sclerite is a hardened body part.

Amazingly, scaly-foot snails are also magnetic because of their ‘iron armor.’

Think of the scaly-foot snail as an armored knight living at the bottom of the deep sea!

Another interesting thing about this deep sea snail is its large heart, comprising approximately 4% of its body volume.

In addition, researchers believe they don’t eat anything. Instead, they rely on the bacteria living in the snails’ special pouch in the throat. These bacteria provide the scaly-foot snail’s food by converting the chemicals from the vents into energy.

Scaly-foot snails were first discovered in 2001 and have been called “scaly-foot.” But it was only in 2015 that it was formally named Chrysomallon squamiferum.

In 2019, another remarkable discovery about scaly-foot snails was made. Scientists found that the scales on a snail’s foot are not for protection against predators. Instead, they act as tiny exhaust pipes that draw away the toxins inside.

Remember the bacteria living in the special pouch of the snail’s throat? Unfortunately, it releases sulfur, which is deadly to snails.

The scales wards off the harmful sulfur away from the snails’ soft tissues. It then unloads it on the outside as a harmless iron-based compound.

The International Union for Conservation of Nature (IUCN) has the scaly-foot snail as an endangered species in 2018. There have been potential threats of deep-sea mining to their habitat.

Unfortunately, there are still no actions to conserve or protect the hydrothermal vents where the scaly-foot snails are often found.

What are your thoughts about this? Do you have other interesting facts about Scaly-foot snails? Comment with your answers below!