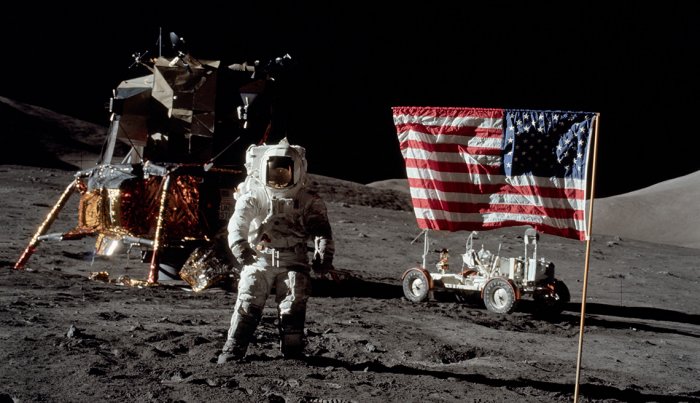 After eight challenging years and countless hours, man was finally on the moon. Flight Director Gene Kranz would soon “go around the horn” for the first Stay/No Stay decision.

“You know, they landed, and everybody’s cheering and everything and then all of a sudden somebody notices something’s gone wrong. Temperature’s building up. Uh-oh! It shouldn’t be like that,” explained Grumman engineering manager John Coursen.

Up, up, up went the temperature in the fuel line of the descent rocket engine. Up, up went the pressure. Rocket science rule number one? Do not allow the fuel to become unstable. Instability means unpredictability- and unpredictability is just another word for random explosions and all sorts of unwanted chaos.

Everyone sprang back into action. At the Grumman plant in New York, there was a frenetic burst of engineering pandemonium:

from table to table, rushing,

“Do you remember that one test? What about when such and such happened? Remember when so-and-so talked about… any ideas?…”

At 300 degrees, the fuel was quickly approaching its 400-degree instability rating. Engineers at Grumman, and their counterparts at NASA in Houston simultaneously deduced the likely culprit: a slug. A solid slug of frozen fuel had trapped a small amount of the descent fuel in the line. This caused the temperature and pressure in the line to rise rapidly- and dangerously.

Everyone argued their options.

They could (1) abort now and leave the problem on the moon. (The slug was located in the descent stage, and liftoff depended on the separate ascent stage. The descent stage- no longer necessary, would be left behind.)

Or they could (2) try and “burp” the engine- give the valve a quick open/close to release the built-up pressure.

The trouble with option 2 was that the venting might push the fuel to an unstable condition. Or, another possible outcome of the “burping”: what if the landing gear wasn’t deployed correctly? Could any movement, or any resulting burst- tip the LM over?

Many a voice thought it was safest to abort- now! But that option was quickly overruled by those who were confident in the landing gear. It was decided that it would be safe to gently, gently, burp the engine.

Suddenly, though, just as the procedure was about to relayed to the astronauts, the pressure… the temperature dropped! And… stayed down. The slug, apparently, had melted!

And only now, a gut-wrenching ten minutes later- did it truly sink in for everyone who had poured years of their lives into building the lunar module; Their baby was on the moon! Let the cheering begin!