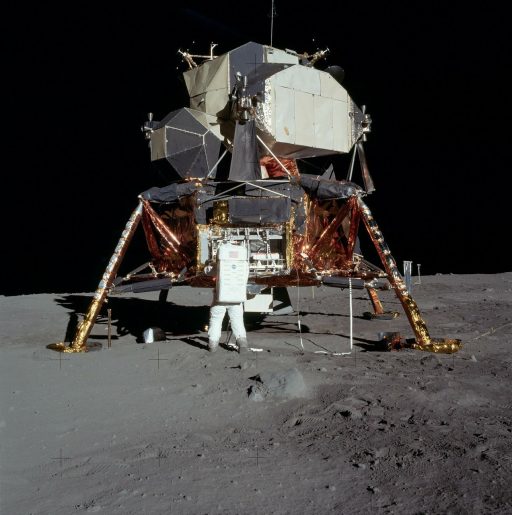 Space… it’s dangerous out there: micrometeoroids, radiation, airlessness. And coming home would be no picnic, either. The compact-car-sized space capsule would be greeted by searing white-hot flames as it slammed madly back down to earth.

“In designing the command module, the one thing we had to be sure of was that we could keep the crew alive- that was a big item,” said Max Faget, NASA chief engineer and principal designer of the command module.

Keeping the crew alive under such extreme conditions was indeed a big item. Only the command module, Columbia, would make the complete journey from Earth to the Moon and back home again. It would serve as a crew living quarters and as the spacecraft control center. And Columbia, the ship that would finally take them to the moon and back to earth,  alone would confront the fiery Earth reentry.

Columbia was off to confront danger. Its builders would need to rely on their eight years of effort to give them confidence for a successful outcome. But it would be five hundred thousand miles before the truth could be told. Could their command module keep the crew alive?

Launch operations at Kennedy Space Center was like it’s own little town. A whopping seventeen thousand engineers, technicians, mechanics, contractors, and managers were needed to pull together the Apollo 11 launch.

Come launch day, Ernie Reyes (chief of pre-flight operations) and about five hundred others would work the consoles from the firing room of the Launch Control Center, the nucleus of launch operations. They would run the controls that would  catapult Apollo 11 moonward bound. Five thousand others would directly support them for the liftoff. On July 16, 1969, they were indeed ready. And at 9:32 A.M…. whoosh!