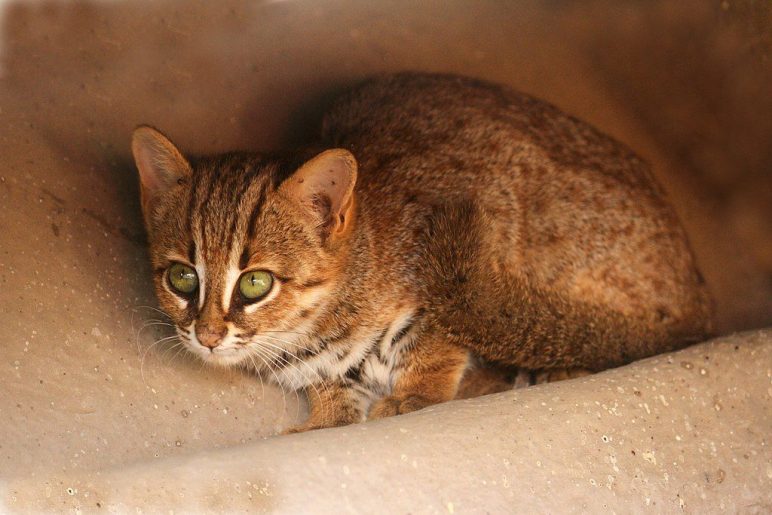 There are about 10 million animal species living on our planet, and they all come in diverse shapes, sizes, and colors. From the smallest to the largest living animal—there’s no denying that they come in incredible diversity.

Did you know that there’s a cat species so small it can actually fit in the palm of your hand?

The Rusty-spotted cat, also known Prionailurus rubiginosus, is the smallest wild cat in the world. At birth, it is no bigger than a mouse. When fully grown, it only measures around 14 to 19 inches (head to body) with a 5.9 to 11.8 inches long tail. In addition, it only weighs about 2 to 3.5 pounds or 0.9 to 1.6 kg. According to researchers, it’s about half the size of a domestic cat.

This small feline is native to Southern India and Sri Lanka and mainly inhabits dry deciduous forests, scrub forests, grasslands, and rocky areas. However, there also have been recent sightings of them in Nepal.

A rusty-spotted cat has short and soft, brownish-gray fur with rusty-brown spots that create a pattern on its head, back, and flanks (similar to a leopard). This appearance’s where it got its name. Its cheeks are marked with two dark streaks and dark stripes extending above the eyes, between the ears, and then towards the shoulders.

In addition, this feline’s ears are small and rounded. Its tail is covered with dark rings, while its chin, throat, chest, and belly are white and marked with distinctive brownish spots.

Very little is known about the rusty-spotted cat’s ecology and behavior in the wild, making it challenging to study because it mostly avoids the sight of humans.

But the rusty-spotted cat is known for being nocturnal and a fierce hunter. It also has its unique nickname ‘Hummingbird of the cat world‘ because it’s so agile. This small feline is a good climber and can easily change directions to evade predators.

In general, the rusty-spotted cat mainly preys on small animals, such as birds and rodents, but it’s also known to feed on frogs, lizards, and insects.

Today, the rusty-spotted cat is facing a threat of extinction in the wild because its population keeps on decreasing. There are less than 10,000 estimated rusty-spotted cats in the wild, making its conservation status listed as Vulnerable. The IUCN Red List classified this cat as Near Threatened, while the National Red List of Sri Lanka listed it as Endangered.

The continuous decline in the rusty-spotted cats’ population is mainly caused by habitat loss and hunting for their coat and meat. They are also hunted as a pet and as livestock pests.

Hunting and trade in India, Sri Lanka, and Nepal are now prohibited to fight this feline’s endangerment.