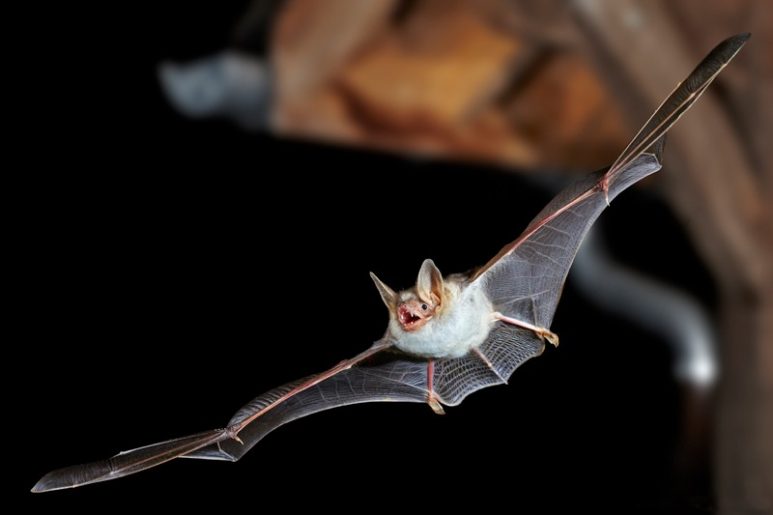 I think you’ve already heard of the famous term “survival of the fittest,” made popular by the well-known 19th-century naturalist Charles Darwin. This phrase means that the most successful organisms in reproducing and surviving are the ones that best adjust to their environment.

Each animal has its unique and amazing strategies to survive on our planet. For example, some animals camouflage to blend themselves while others startle predators (deimatic defense) to escape. Some animals raise their quills, while others spit out poison or release toxins from their skins.

Every species needs to adapt to its habitat to survive the many natural dangers and threats to its lives.

Have you ever heard of a bat that can imitate the buzzing sound of a hornet to scare off predators, such as owls?

If you haven’t yet, let me introduce the Greater mouse-eared bat to you.

The greater mouse-eared bat, also called Myotis myotis, is a widespread European species of bat that commonly eats insects, particularly beetles. They are mostly found hanging out in the forest edges, in caves underground, or their colonies in the woodlands. This bat species is often a prey by various species of birds, such as tawny owls and barn owls.

A new study published in Current Biology revealed that greater mouse-eared bats use a phenomenon called Batesian mimicry, which is a form of mimicry, or behavior of imitating the warning signals of a threatening species to scare off predators.

The researchers noted that this technique, Batesian mimicry, is used mainly by reptiles, insects, and birds, and it’s the first time this has been observed in mammals. When the researchers were handling the greater mouse-eared bats, they found that this bat species seemed to copy the hornet’s buzzing sound to ward off predatory birds.

To further investigate the theory, the researchers compared the buzzing sound coming from the greater mouse-eared bats with the sounds from four hymenopteran insect species. Among them includes European hornets and honeybees. They analyzed the sounds according to their call duration, wavelength, frequency, and other factors. Some of the highest pitches from the bat’s distress call were tweaked and removed to adjust the sound parameters to fit what only an owl would hear.

They even played the various buzzing sounds from different hymenopteran insects and a bat’s social call through a speaker to some owls living in captivity. This is to learn how the owls would respond to the distinct sounds.

The researchers discovered that the owls seemed to be more interested, moving towards the speaker when they heard the bat’s social call. In contrast, they moved away or distanced themselves from the speaker upon hearing the recording of the bat’s buzzing sound.

The researchers conducted another experiment with wild owls, and they discovered that the wild owls seemed more scared than captive-raised owls. They speculated that the difference in this behavior is because the wild owls are more likely to have had an actual encounter with a stinging insect, so their response was that they remembered getting stung.

However, the researchers acknowledged that the study still has limited scientific data to support the claims fully and stated that owls feared the buzzing insects.

Many questions still remain unanswered, but scientists say that this study could help broaden the study of Batesian mimicry or the differences in the acoustic mimicry used by different species.

What are your thoughts about this? Do you think greater mouse-eared bats mimic hornets to protect themselves? Do you know other animals that use mimicry? Please comment down below with your answers.