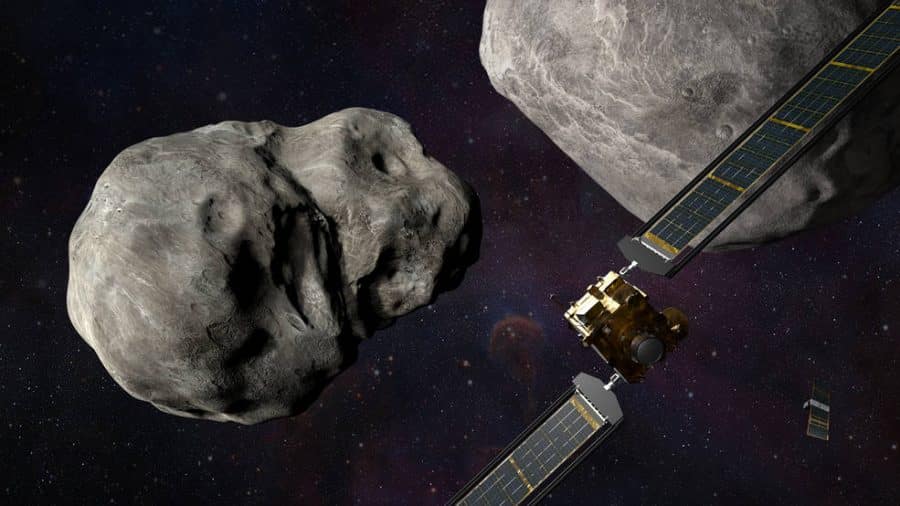 Asteroids often get close to Earth every day but rarely does one touch the ground. But did you know that the last known catastrophic impact event on our planet was about 66 million years ago?

It’s not entirely known—the exact number of asteroids or meteorites hitting the Earth daily. However, experts estimate that about 10 to 50 meteorites fall, and roughly 17 meteorites strike the Earth’s surface daily. This would make more than 6,100 meteorites falling over the entire Earth yearly.

And here’s a thought: What if an asteroid were to strike Earth one of these days? Do you think we would have the chance to survive a destructive event such as that?

It sounds quite impossible, right? But we may do have a chance now.

NASA is gearing up to stop a 525-foot-wide asteroid from hitting Earth on Sept. 26, 2022. They will crash a spacecraft on the asteroid Dimorphos at 15,000 mph or 4.1 miles per second. It will happen about 6.8 million miles from Earth.

Dimorphos is a moonlet or small asteroid satellite, about 525 feet long, discovered in 2003.

It orbits the larger asteroid Didymos, which is about 2559 feet long. Together, they form a binary asteroid system or a system of two asteroids that are gravitationally bound. Both orbit around their common point called the barycenter.

Double Asteroid Redirection Test (DART) is the first-ever planetary defense test mission. Its goal is to test the technology and planetary defense strategies to defend Earth against potential asteroid and comet threats by purposely crashing into an asteroid.

The DART spacecraft was successfully launched onboard a SpaceX Falcon 9 rocket from Vandenberg Space Force Base on Nov. 24, 2021.

The asteroid Dimorphos poses no actual threat and is merely selected for the test. By deliberately crashing into it, DART could prove that the kinetic impact technique works.

Kinetic impact technique is a method of deflection. Its concept involves sending or crashing a high-speed spacecraft into an approaching asteroid that will change its orbit and divert its pathway away from Earth.

The test won’t necessarily destroy Dimorphos. Instead, it will give a tiny nudge, about 1%, strong enough to change its orbit and speed.

Scientists will accurately measure the asteroid’s path and speed change using ground-based telescopes on Earth. To be considered a success, the minimum change should be 73 seconds for it to complete an orbit around the smaller Didymos asteroid.

Although there is no catastrophic asteroid impact threat to Earth found yet, test missions like DART are vital as they will help us better prepare should one pose an impact danger. In addition, this can be one way to prepare to stop destructive astronomical objects collisions headed toward Earth.

You can also check the countdown here.