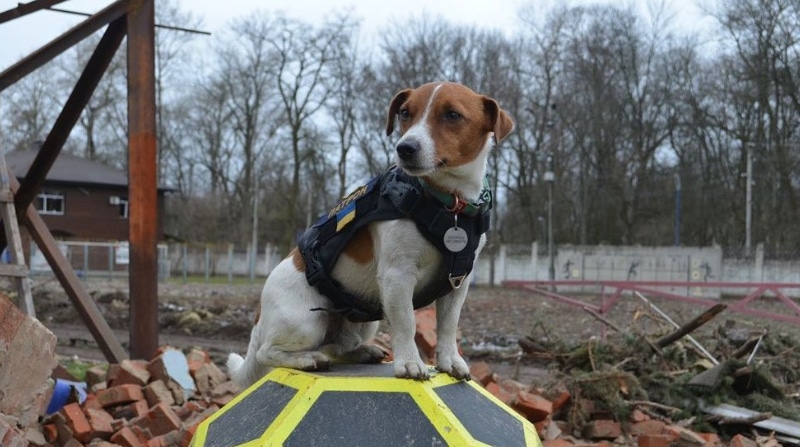 Not all heroes wear capes. Some have furry coats, wagging tails, and floppy ears.

Meet Patron, a 2-year-old Jack Russell terrier who has been saving lives in the war in Ukraine by discovering dangerous explosive devices. He was able to locate and help neutralize over 150 dangerous Russian bombs and landmines left by Russians since the invasion began.

This mighty Jack Russell terrier, whose name Patron means “Ammo” in Ukrainian, is a service dog working with the State Emergency Service rescue team. He’s currently based in the northern city of Chernihiv, Ukraine. He’s often seen wearing a military protective vest as he sniffs and digs in the dirt for unexploded bombs.

Because of his outstanding contribution, Patron became the face of The State Emergency Service (SES) of Ukraine’s rescue team and was dubbed the mascot of Chernihiv pyrotechnicians. They also refer to him as “our pyrotechnic dog Patron.”

In a short span of time, Patron has become famous on social media, winning hearts throughout Ukraine and across the globe. He currently has over 98.2 thousand Instagram followers.

Earlier this week, the State Emergency Service (SES) posted a series of photos featuring Patron as he joins the pyrotechnicians team on their education and rescue outreaches. The album includes images of Patron on an armored vehicle, a child holding the dog, and many more.

They also shared an album of more than a dozen illustrations made and submitted by gifted Ukrainian artists across the country in honor of Patron. Other fans have also shared knit plushies and sketches of Patron on social media.

It has been a while since the full-scale invasion of Russia in Ukraine happened on February 24. Nevertheless, Ukrainian people continue to fight, and a story like Patron motivates the people still waiting not to give up no matter how hard it is.

On May 8th, 2022, Ukrainian president Volodymyr Zelensky presented Patron and his owner with a special medal for their important service.

What are your thoughts about this? Do you know any other pet heroes? Please comment down below with your answers.