KidzNet > Games > Why I Don’t Like Cool Math Games 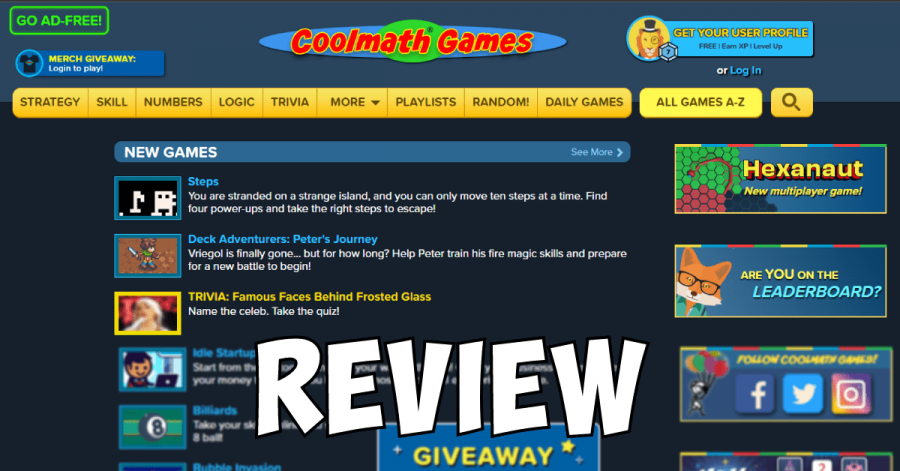 Today I am going to review coolmathgames.com, one of the top “educational” websites on the internet. I’m also going to explain why I don’t like this website, but we’ll get into that later.

At a glance, Cool Math Games is an online arcade filled with an impressive catalog of educational games for kids. However, you will come to realize that while there are some educational games, the vast majority of them aren’t any better than traditional games such as Minecraft Education Edition! According to student-tutor.com, having your students spend time on Cool Math Games isn’t helping them learn any more than their video game system already does because of a lack of curriculum focus. For example, their skill games require no critical thinking skills and absolutely zero math skills to play. The same goes for their strategy and logic sections. Some sections such as trivia and numbers actually touch on math problems, but are also filled with time wasters. Therefore, having the name “Cool Math Games” is manipulating the educational system by providing no real value for students.

Aside from Cool Math Games’ low educational value, we also need to address the fact that the website was created strictly for monetization purposes at the least, and at the most may be a downright cash grab. First off, Cool Math Games is packed with more intrusive advertisements than other similar websites such as KidzSearch games, being so bad that I had to install 2 ad blockers just to get a good screenshot of their website. On top of all that, you need to watch a video advertisement to play a game on full screen! Fullscreen gameplay is a very basic and essential feature for an online arcade, and the fact that they are trying to put that behind a paywall is honestly overboard. Speaking of the paywall, that will set you back $5.99 a month for big screen gameplay, zero ads, a custom nickname, and other cosmetics. It’s really a waste of money.

Despite all of these issues, I do think that Cool Math Games could have a place in schools as a reward for good behavior in the classroom. While the games aren’t math focused, they are school-friendly, non-violent, and appropriate, which makes it a great site for rewarding good behavior or hard work. Besides that, The bottom line is that Cool Math Games is only loosely tied to math with a user interface that is dated and uninspiring according to a staff review on commonsense.org. That just about wraps up my review, and be sure to leave a comment if you have anything to add. Thank you for reading to the end!