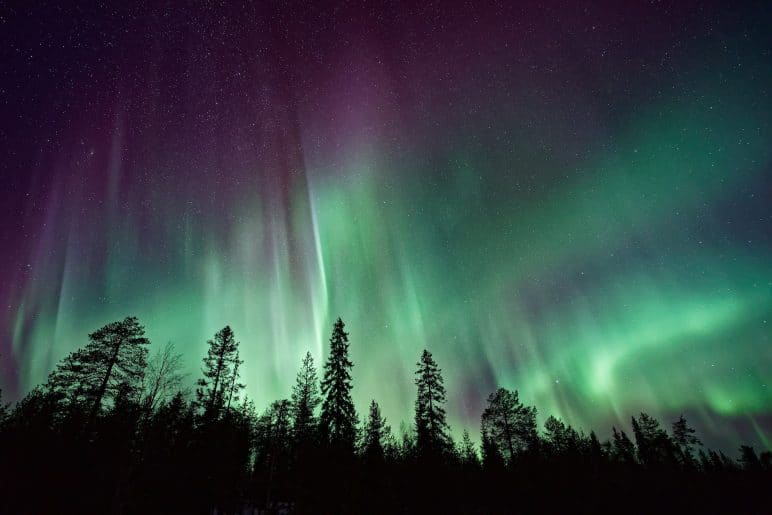 An aurora, also known as the polar lights, is a stunning natural light show in the Earth’s sky. With its vibrant patterns of glowing, colorful lights that appear as flickers, rays, spirals, or curtains, it’s definitely one of the most breathtaking displays in the night sky.

And if you’ve already seen an aurora in person or even in videos, I’m pretty sure you’ve wondered how these ethereal light curtains are formed.

But before that, let’s talk about what an aurora is first.

An aurora is a natural phenomenon of bright dancing lights mainly seen in high-latitude regions. It can be seen near both poles: The northern and southern hemispheres.

The aurora display near the North Pole is known as the aurora borealis or northern lights. In contrast, it’s called aurora australis or the southern lights if it’s near the South Pole.

So what causes it?

These magnificent dancing lights we see in the night sky are caused by activity on the Sun’s surface.

The sun is a big ball of superhot gases made up of ions or electrically charged molecules. And the ions that continuously flow from the Sun’s upper atmosphere are called the solar wind. This solar wind, along with the particles, drifts away and travels millions of miles.

When it approaches the Earth, it meets our planet’s magnetic field. The magnetic field is important as it protects the planet from high amounts of radiation from the Sun. This plays a vital role in making Earth a habitable planet.

Most solar wind particles are deflected away, but some become briefly trapped in the ionosphere or the part of Earth’s upper atmosphere.

The solar wind’s ions accelerate down towards the north and south poles. And as the ions of the solar wind travel, it collides with the particles (atoms of oxygen and nitrogen) in the Earth’s atmosphere.

Because of this, energy is released during these collisions (in the form of visible light energy), and that is what causes the polar lights. The distinctive patterns and glowing light curtains of the aurora are caused by the lines of force in the planet’s magnetic field.

Now you might be wondering what causes the different colors in the aurora.

Well, it’s because of the altitude and different types of particles in the Earth’s atmosphere that collide with the solar wind’s ions. For example, if the ions collide with oxygen atoms, it creates a green hue. It is related to the change in energy levels that happens when an atom gets hit by another particle in order to become more stable.

However, displays of blue, purple, or pink lights are caused by nitrogen.

And on rare occasions, we see a scarlet red light when oxygen atoms are high in the atmosphere.

Most auroras happen about 60 to 620 miles ( 97 to 1,000 km) above the Earth’s surface. It’s easiest to see when it is very dark at night and when the solar wind is at its strongest.

What are your thoughts about this? Have you ever seen them in person? Do you have other fun facts about auroras? Comment down below and share them with others!