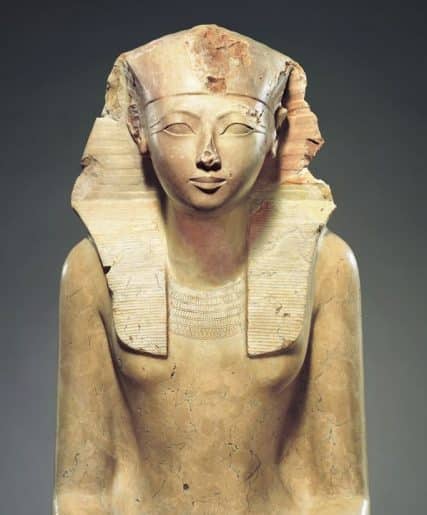 Hatshepsut was an Ancient-Egyptian ruler who was the longest-ruling and most successful female pharaoh.

She was born into royalty around 1507BCE. Her father and her brothers were pharaohs, which made her a princess. But she became a powerful ruler.

Hatshepsut began in 1478 BCE when she married Pharaoh Thutmose ll at age 12. When her husband died, she ruled in place of his son. At some point, however, Hatshepsut proclaimed herself pharaoh rather than continuing to act as the boy’s regent until he was old enough to rule. Many Egyptians referred to Hatshepsut as a king, not a queen.

As a ruler, Hatshepsut worked with other kingdoms to create relationships, and she opened new trade routes.

Egypt was a wealthy and peaceful place during her rule.

Hatshepsut also dedicates her reign to building magnificent temples and monuments, to help poor people. Her most impressive building was her mortuary temple, a burial place for all of Egypt’s most powerful pharaohs. This temple became the standard for all future pharaohs.

Many of Hatshepsut’s buildings are now recognized as architectural marvels. Hatshepsut died at a young age, and many believe she was poisoned. Following her death, pharaohs attempted to erase her from Egyptian history, possible to hide the fact that a woman had been a pharaoh. And they were almost successful.

Her reign was unknown to scholars for many centuries until researchers began to dig deeper in to ancient texts. Which pointed a powerful woman ruler. Today, you can find Hatshepsut’s artifacts in nearly every major museum.

How many of you knew about Hatshepsut? Please comment below.