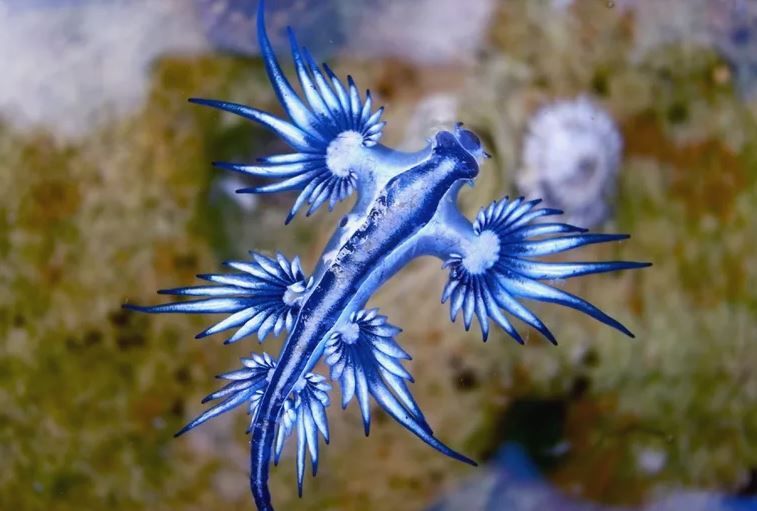 Hello everyone !! today I am gonna tell you about one of the weirdest animals on earth. I broke the article into few parts and subtopics. This is the first one about the BLUE ANGEL, also known as the BLUE DRAGON…

Blue dragons are only approximately 1.2 inches long, but they consume prey that is many times their size. Along the creature’s chitinous jaw, they use radular teeth that resemble a knife’s serrated edge. Chitin is the same tough substance that makes up the outside of your body.

Against a blue background, a blue dragon is eating porpita bermuda.
The blue tint of this animal isn’t just for show. As it floats on the ocean’s surface, the sea slug takes advantage of its color. Its cyanic side faces upward to blend in with the sea’s blue tint, while the silver side faces downward to blend in with the dazzling surface of the water.

On the beach, a Blue Dragon washed up.

The blue dragon possesses a formidable defense system in addition to its camouflage skills. It will merely deliver a nasty sting if the coloring fails.

However, the slug isn’t venomous on its own. It keeps the stinging nematocysts produced by the organisms it eats, such as deadly siphonophores and Portuguese man o’ wars. When the blue dragon is touched, these stinging cells are stored and concentrated, allowing it to deliver an even more deadly punch than the man o’ war hydrozoan.

Groups of blue mythical beasts drift among the blue-tinted siphonophores they eat, making arrangements known as “blue armadas.” This behavior makes sense for nourishing and mating, but it does make conditions favorable for maritime winds to blow them around by expanding their uncovered surface area. Blue mythical serpents twist into balls to protect themselves when they’re caught in waves and are being pushed toward the shoreline. And on the off chance that they do end up stranded on the sand, their poison remains active—even after they pass on. This implies that people who pickup or step on the animals may be hurt.

They Do Not Make Great Pets

Ok… then so today you learned about the blue dragon. Next up I’ll be sending an article about  the glass-like transparent GLASS FROG!!

STAY TUNED WITH KS TO FIND OUT MORE!!

Have you ever heard about this strange creature? Please comment below.