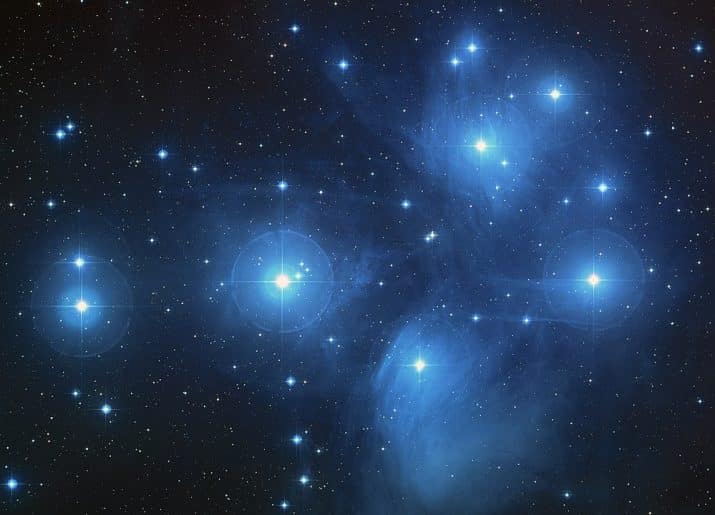 On a dark, cloudless night, we can see thousands of stars scattered across the inky black soup of night. If you look at the stars long enough, you might imagine that you can see simple pictures of people, animals, weapons, and much more. The stars outlining an imaginary picture are called constellations.

Although the constellation Cassiopeia was named after a mythical queen of Ethiopia, it really looks more like a letter of the alphabet than a person. Made up of five bright stars, the constellation seems to form the shape of a huge M or W, depending on which way you see it.

The constellation Cepheus, named after Cassiopeia’s husband, looks like a house with a sharply pointed roof. If you imagine that the roof is actually a tall hat, you can see the profile of the king’s face below it.

The Lady in Chains – Andromeda

According to mythology, Cassiopeia and Cepheus had a daughter named Andromeda. Because her beauty made others jealous, Andromeda was chained to a huge rock and left to be devoured by a great whale. (For most of the year, the stellar constellation Whaleis too far below the horizon in the Nothern Hemisphere for us to see him). The stars in Andromeda seem to depict the figure of a lady bound with a chain.

Near Andromeda’s “knee” is the spiral Andromeda galaxy. Roughly 15 quintillion miles away, this galaxy has been dubbed the most distant object that can be seen with the naked eye.

To the Rescue – Perseus

In the early evening sky of winter, the constellation Perseus will be almost directly above you. Perseus was a mythical hero who killed the whale, saved Andromeda from the rock, and later married her. One of the brightest star in this constellation is Algol. Algol is a binary star, meaning it is actually a group of two stars. Every three days, it dims for ten hours as the fainter star passes in front of the brighter star.

Are you able to find these constellations in the night sky? What other ones do you know? Please comment below.