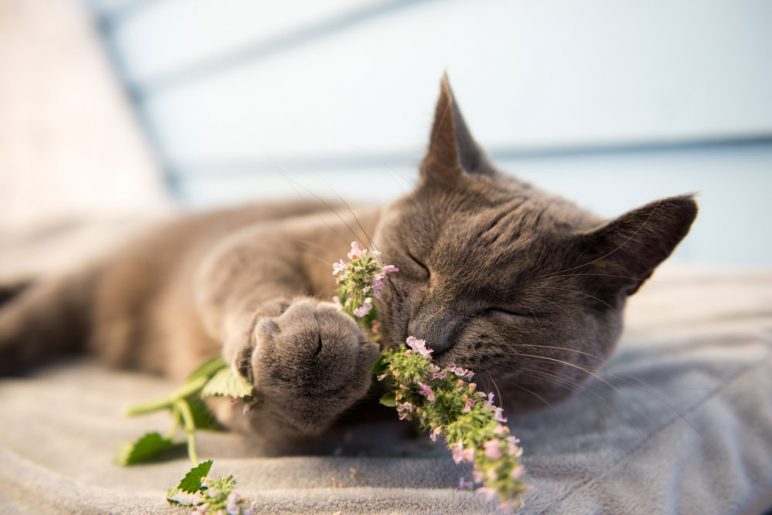 I bet you’ve already watched a bunch of funny videos on the internet about cats rubbing against every surface, flipping out, blissfully rolling around the floor, or darting around the house (generally acting weird) after eating or sniffing catnip.

Have you ever wondered why cats go crazy for catnip?

But before I tell you the secret as to why cats love this herb, you may be asking, “What is catnip anyway?”

Catnip, known by its scientific name Nepeta cataria, is a strong-scented perennial herb from Lamiaceae or the mint family. You may identify this herb by its green-toothed leaves and tiny clusters of fragrant flowers that are either white or pinkish in color with purple spots.

This strong-scented mint is native to eastern and southern Europe, Central Asia, and the Middle East and has now been widely grown in North America, northern Europe, and New Zealand. Its dried leaves are widely used in cat toys.

The Latin word ‘cataria‘ from its botanical name even means “of a cat.”

So, what does catnip do to cats, and how does it work?

It has been known that catnip produces an active organic chemical compound and essential oil called nepetalactone that affects the behavior of domestic cats and other big cat species, including tigers, lions, leopards, and cougars. The nepetalactone can be found in the catnip plant’s leaves, stems, and seeds.

The compound is released when the plant is crushed, chewed, or when the cat rubs against the fresh or dried catnip leaves. Once the compound is released and inhaled by cats, it attaches to the olfactory cells that send signals to the cat’s brain, making it act weird or go wild. Some scientists have also stated that catnip targets cats’ brains, mimicking a cat pheromone and giving them a sense of euphoria. It usually takes only one or two sniffs for the catnip to affect cats.

Moreover, a recent study from Japan, which was published in the journal iScience, also showed that catnip produces a chemical compound called iridoids. These compounds are found in the leaves of catnip that acts as an insect repellent. It showed that the iridoids help protect the cats against mosquito bites. Researchers also found that this compound repels a specific species of mosquito called Aedes albopictus quite efficiently.

The study also found that when the cats lick or chew the catnip leaves, it releases iridoids 10 times more powerful than when it was from intact or undamaged catnip leaves. As a result, mosquito repellant properties are stronger and more effective.

The catnip’s iridoids also produce the instinctive behaviors of cats, like rubbing, licking, chewing, and rolling over the catnip. This is a result of the olfactory stimulation of the said compound.

However, it’s also important to note that the effects of catnip may vary, depending on the age and genes of a cat. Researchers have stated that about 30% of cats are immune or don’t have any reaction to catnip at all. They also consider that genes are a big part of why some cats react differently towards catnip. In addition, senior cats and kittens are typically less affected by catnips. In fact, kittens will only begin to respond once they reach 3 to 6 months.

The researchers want to venture into future studies about the relationship between catnip and the exact gene of cats that don’t respond to these plants. This recent discovery will also help learn more about the plant compounds that could be used as human insect repellants.