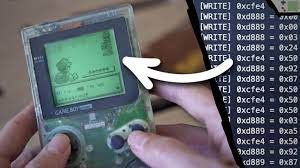 (If you haven’t already seen Part 1 or Part 2, I highly recommend checking them out!)

Let’s start where we left off.

To understand what I am about to talk about, you need to know how to encounter Missingno..

To catch Missingno., go to Viridian City and talk to the Old Man after he has had his coffee. He will ask you if you know how to catch a Pokemon. Say no, and watch his catching tutorial. Then use a Pokemon that knows the HM fly, and fly straight to Cinnabar Island, avoiding any area where pokemon may spawn. Surf up and down on the east coast using another HM, and you will encounter crazy high-leveled pokemon, Missingno.’s counterpart “M,” or Missingno. itself.

How and Why Does It Happpen?

You may be asking, if Missingno. was supposed to be an unobtainable pokemon, why is it so easy to catch?

The Old Man showing you how to catch a Pokemon.

Because of the very limited space Game Boys had, your trainer’s name is stored in the very same place that wild Pokemon encounters are temporarily held. This should be fixed whenever the trainer walks into grass or and other Pokemon spawning area. But when the game was being developed, Game Freak forgot to make the same thing happen with the East Coast of Cinnabar Island.

So the game looks to see what Pokemon should appear, and it comes up with your name. Since the trainer’s name is not a Pokemon, it freaks out when it doesn’t know what should appear and gives you high-leveled Pokemon, a “M,” or a Missingno..

It is now joked that “The Old Man can’t catch a glitch.”

Depending on what your name is, you an catch different forms of Missingno. besides the backwards L. These are referred to as “special Missingno.”

The special Missingno. forms are as follows:

The aerodactyl fossil from the Pewter City museum. It appears when the letter “x” is in the 3rd, 5th, or 7th space in your name.

The kabutops fossil from the Pewter City museum. It appears when the letter “w” is in the 3rd, 5th, or 7th space in your name.

The ghost found in Lavender Tower is the player does not have a Silph Scope. It appears when the letter “x” is in the 3rd, 5th, or 7th slot in your name.

So that’s it! It took a bunch of explaining and I am grateful that you all read this anyway.

There have been lore and myths about Missingno. in other games, as well, such as in X and Y.

This is actually just a fogging glitch, and not an easter egg that the game put in as a teaser.

If you want to learn more about Missingno. or M, click on one of these links.

I’m pretty sure good ol’ Bulbapedia can explain it better than I have.

This is @esie, signing off!