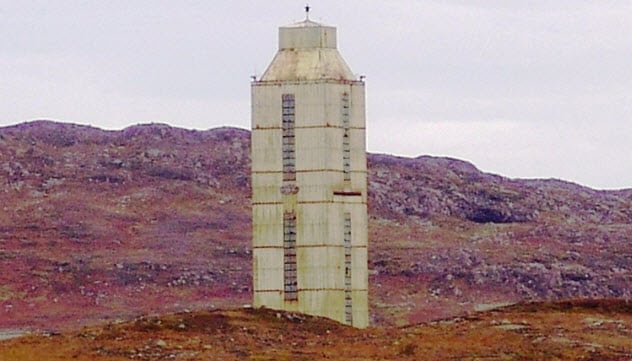 The Kola Superdeep Borehole is the result of a scientific drilling project of the Soviet Union in the Pechengsky District, on the Kola Peninsula. The project attempted to drill as deep as possible into the Earth’s crust. Drilling began on May 24th, 1970.

The project ended in 1995 due to the dissolution of the Soviet Union and the site has since been abandoned. The ruins of the site, however, are frequently visited by curious sightseers.

The Kola borehole penetrated about a third of the way through the Baltic Shield continental crust, estimated to be around 35 kilometres (22 miles) deep, reaching Archaean rocks at the bottom. The project has been a site of extensive geophysical studies.

Microscopic plankton fossils were found 6 kilometers (4 mi) below the surface.

Another unexpected discovery was a large quantity of hydrogen gas. The mud that flowed out of the hole was described as “boiling” with hydrogen.