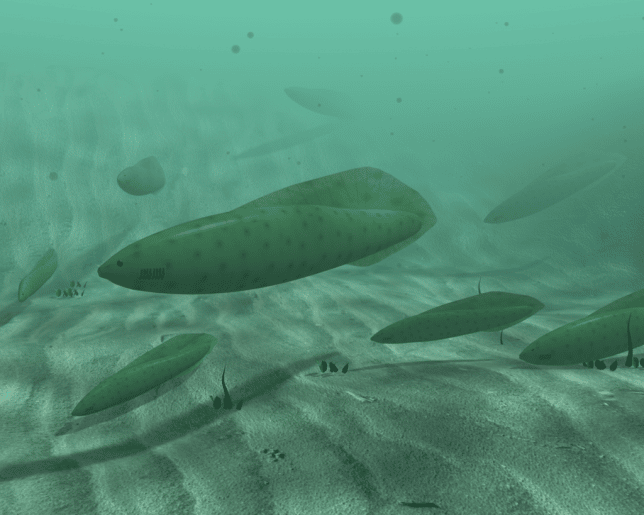 We think that life began on Earth at least 3.5 to 4 billion years ago. This is because the oldest evidence of life form recorded is a 3.49-billion-year-old microscopic fossil.

The remains of the Stromatolites or microbial reefs created by cyanobacteria were found in the Pilbara region of Western Australia. This oldest fossil ever discovered represented the beginning of life on Earth.

But what if I tell you there’s also an uncovered oldest fossil of fish, and it was already revealed to the world in 1999?

Let me introduce you to Haikouichthys.

Haikouichthys (HIGH-koo-ICK-thiss) is a prehistoric fish and an extinct genus of Craniate or animals with a skull or cranium.

Not only is Haikouichthys the first fish that ever lived on Earth, but it’s also the oldest-known vertebrae (backboned animal).

This prehistoric fish is only about 1 inch long and weighs less than an ounce. Its head has at least six to eight, maybe even nine slits at its base that resemble gills. In addition, the spine of Haikouichthys is distinct, surrounded by muscles.

The oldest fossil of Haikouichthys was found near Haikou at Ercaicun, Kunming City, Yunnan, China and was about 518 million to 530 million years old. This means it lived during the Cambrian period or when most major animal groups began to appear in the fossil record.

Now, you might be curious about how scientists determine how old a fossil is or how long a species has lived.

So, how do scientists know how old a fossil is? Here’s how.

Two main methods can be used to determine a fossil’s age: Relative dating and Absolute dating.

Relative dating is when the age of a fossil is determined by comparing its age to similar rocks of known ages.

As we all know, fossils are preserved remains of ancient organisms, not the remains themselves. In short, fossils are rocks!

In contrast, Absolute dating or numerical dating uses radiometric dating methods to determine the exact age of a fossil. It’s based on measuring the types of atoms the fossil or rock is made of. It mainly compares the presence of a radioactive isotope within the specimen to its known abundance on Earth and known decay rate. Like a clock, this is a reliable way to calculate the sample’s age.

However, the classification of Haikouichthys as the first fish remains controversial because other fishlike fossils were found from the same period.

But who knows? We weren’t exactly around to see what was happening when these creatures lived on Earth.

So until there is no definite discovery about older fishlike species, I think it’s safe to say Haikouichthys remains the oldest fish that lived on Earth.

What are your thoughts about this? Do you know other known prehistoric fish? Comment down below and share it with others!