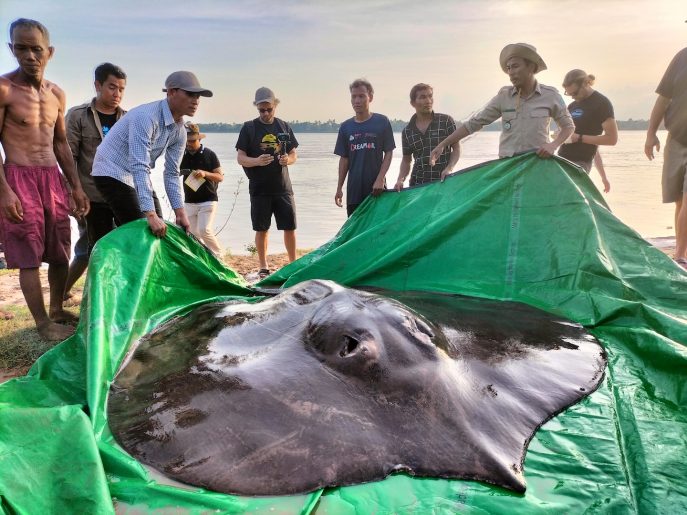 On the remote island of the Mekong River in northern Cambodia, a 42-year-old local fisherman named Moul Thun unexpectedly caught the world’s largest freshwater fish ever recorded. It was caught on the night of June 13th, 2022.

The female stingray is named Boramy, which means “full moon” in the local Khmer language. They called it Boramy because of its round shape and because the moon was visible on the night it was released on June 14th.

This discovery beat the previous world record-holder for the largest freshwater fish, a 646-pound (293 kg) giant Mekong catfish, which was caught in 2005.

After the fisherman caught the stingray, he immediately contacted the researchers of the Wonders of the Mekong, a joint study project between Cambodia and the U.S. about the Mekong River ecosystem. The researchers arrived at the location hours after getting the post-midnight call.

On June 14th, the team we’re able to move the stingray with the help of a dozen men to the shore and began the measurement. The giant stingray was measured on a green tarp while the people around continued to splash freshwater inside to keep it wet. Then, the researchers inserted an electronic tagging device near the stingray’s tail.

The tagging device will allow the researchers to monitor the fish’s movement and behavior. It will also send the following year’s tracking information, including where it gives birth, feeds, and travels. After the measurement and tagging, they released Boramy back into the river.

According to researchers, it’s the fourth giant stingray reportedly caught in the same area in the past two months, and all were females. So they believe this area is a spawning hotspot for the stingray species.

They also believed this was a positive sign of hope for the Mekong river despite the current environmental challenges it’s facing. It also proves that these giant fishes still exist despite being in critical danger of extinction.

Researchers also stated that about 70% of giant freshwater fish are endangered species threatened with extinction. They also noted that all of the endangered are Mekong species. The Mekong species is the third-most diverse freshwater fish worldwide. Still, their population has plummeted due to pollution, overfishing, the presence of dams, saltwater intrusion, food competition with invasive species, and sediment depletion.

Conservation efforts have been made, and the research team has already worked with local communities. They built a local network of fishermen who are encouraged to report any catches of endangered fish or stingrays before releasing them back into the river. In addition, the local fisherman who caught the largest freshwater fish was compensated with around $600.