KidzNet > Groups > Space Group > Why Does The Moon Look Close Some Nights And Far Away On Other Nights? 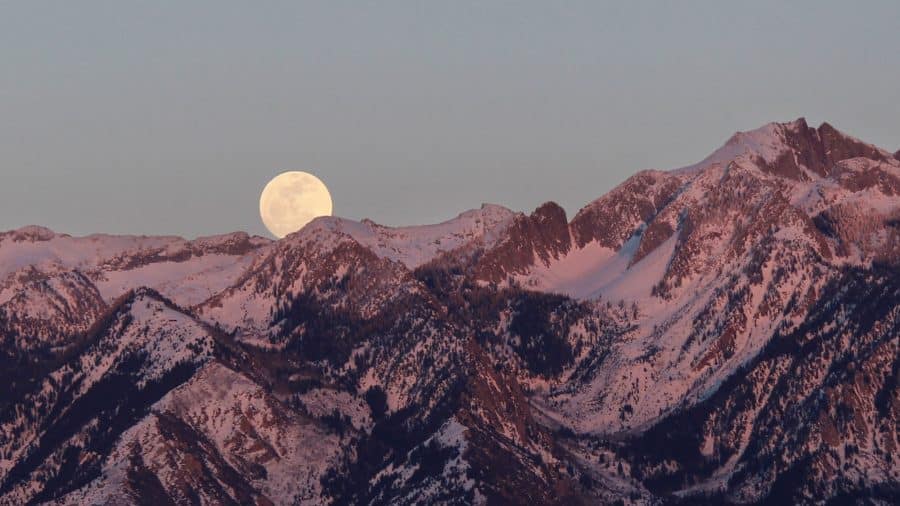 If you’ve ever gone outside to gaze at the night sky, you might’ve already noticed that the Moon looks so close and huge on some nights. But on other nights, it seems far away and is back to looking like its usual size.

Such a mysterious sight, right?

So how does this happen? Here’s the thing: It’s just all in your head.

Yes, you read it right.

It’s nothing but a Moon illusion, a trick of the mind. Nevertheless, this striking phenomenon has been recorded, and the reason behind it has been debated since ancient times.

The Moon illusion is an optical illusion that causes the Moon to look bigger when it’s near the horizon and smaller when it’s higher up in the sky.

Obviously, the Moon has the exact same size and isn’t changing. However, our minds tend to perceive how small or big an object is by comparing it to things nearest or farthest from us. It’s how our brains perceive the relative distance and process visual information.

Although there is no definite reason for this compelling effect, countless theories exist about why this illusion happens.

The well-known Greek philosopher Aristotle proposed a theory that the Earth’s atmosphere acts like a giant lens, enlarging the image of the moon on the horizon. Think of when an object underwater looks larger when you look from above it.

However, we’ve already learned that this theory is untrue, as the Earth’s atmosphere doesn’t alter the moon’s apparent size. Instead, it may cause the moon to appear red or orange (changes color). It’s due to the scattering effect or when the particles bend the moonlight in the atmosphere.

Scientists say one possible explanation could be the Ebbinghaus illusion. It’s an optical illusion where two identical objects look different because of the different sizes of objects surrounding them.

This photo shows two orange circles in the center that are actually the same exact size. But the one on the left looks bigger than the circle on the right because of the larger circles surrounding it. If you don’t believe it, use your fingers to mark the size of one and move it to the other. Amazing, right?

This also connects to another theory, which is the relative size hypothesis. This explains that the sizes of the objects in the foreground affect how we perceive the moon’s apparent size.

Since we are not particularly good at judging the horizon’s distance, our brains rely on the known size of objects in the area that seems nearest to us. When we compare it to a distant mountain (that we already know is huge), our brain perceives the horizon as distant, making the moon look smaller.

Another plausible explanation is the Ponzo illusion. It shows two yellow lines of the same size joining in the distance. However, they look different because we interpret the top yellow line as moving further away.

Our brain is hard-wired to think that the top line needs to be longer to appear the same size as the nearest object. That’s why it’s seen as longer than the yellow bottom line.

Now here’s a nifty way you can test the moon illusion. Next time you see the Moon appearing big and high overhead, stretch your arms, stick your pinky finger out next to the Moon, and close your eyes. You’ll find that you can cover the entire Moon with your finger and that they are about the same size. Next time, do the same when the Moon is higher in the sky. It may look smaller than before, but your finger will cover it just the same.

Until now, the moon illusion is still not properly understood or explained. It’s still a mysterious phenomenon that has been pondered for thousands of years.

That’s all! But before I end this post, I have one last section to share with you.

While reading this, you might also be wondering why we see the different phases of the Moon.

The Moon doesn’t generate its own light. Instead, it gets its light from the Sun. So, the “moonlight” we see and refer to is the Sun’s light reflected off the Moon’s surface.

And as the Moon orbits the Earth, we see the changes in the Moon’s appearance (hence the different phases) because it’s the part of the Moon illuminated by the Sun.

One last fun fact on the subject: Did you know that the word “month” originated from the Proto-Germanic word “mēnōþs,” which means moon?

What are your thoughts about this? Have you ever wondered why the moon looks so big at times and smaller at others? Comment down below and share it with others!