KidzNet > Facts > Why Black Cats Are Associated With Halloween? 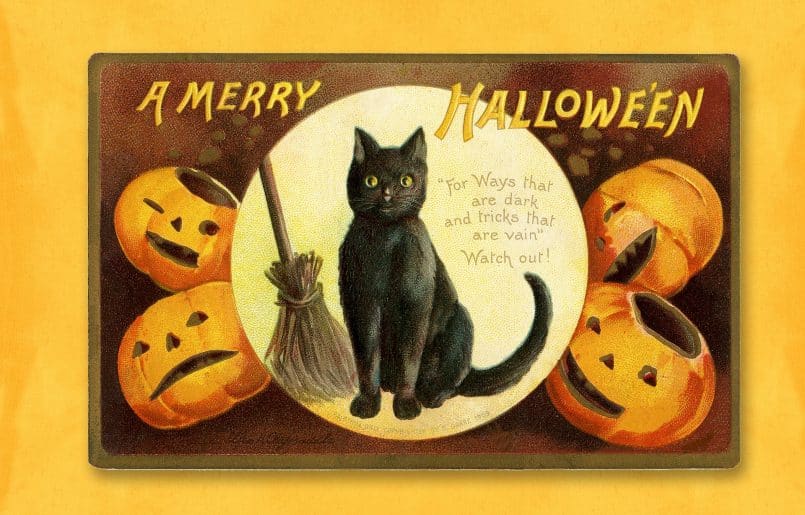 We’re now on part 3 of our Halloween series. If you haven’t read the other parts yet and want to catch up, you can read parts 1 and 2 on KidzNet.

Now, we’re going to talk about the History of Black Cats and Halloween.

Black cats have long been associated with Halloween. Images and decorations of them can be seen everywhere as soon as the spooky season begins. Most are puffed up and ready to fight, lurking in the window or alongside a witch.

But have you ever stopped to wonder how black cats became modern Halloween symbols? And where did this begin?

Keep reading to learn everything you need to know why black cats are closely linked to this widespread fall holiday.

The association of black cats and Halloween may be traced back to ancient Egypt, one of the world’s earliest civilizations. During this time, Egyptians deeply honored and respected cats as they were considered divine animals. They believed they could bring good luck and prosperity to the people who housed them.

Cats are also sacred to Egyptians due to their association with the ancient Egyptian goddess Bastet who had the power to transform into a cat. She is the Egyptian goddess of cats, fertility, home, domesticity, childbirth, and women’s secrets.

There were also written records that date back to the 13th century that linked black cats to the occult. On June 13, 1233, Pope Gregory IX issued the “Vox in Rama,” an official church document that stated, “Black cats were declared an incarnation of Satan.” This declaration of the papal decree led to the persecution of cats in continental Europe, resulting in millions of deaths over the next 300 years.

In medieval Europe, cats were closely linked to witches and were thought of as their familiars or demons obeying and helping witches. This belief was also heightened as cats are nocturnal animals and usually roam at night. It was also believed that witches could transform into cats.

But perhaps one of the most direct associations between cats and Halloween originated from the Celtic festival Samhain.

According to legend, it was believed that Cat Sìths or Celtic fairy creatures resembling large black cats with a white spot on their chest would bless any houses that left a saucer of milk to drink on the Samhain holiday. Likewise, Cat Sìths would curse and sometimes even steal the souls inside those houses that don’t leave one.

The connection of cats with the Celtic festival Samhain was likely carried over into Halloween. Around World War II, black cats became established Halloween symbols.

Even though there’s still a stigma against black cats to this day because of these associations with evil and witches, some cultures believe black cats bring good luck.

If you have a black cat at home, take extra care to keep them safe and warm indoors this Halloween!

What are your thoughts about this? Do you have other legends or myths that helped make the connection between cats and Halloween? Comment down below and share them with others!