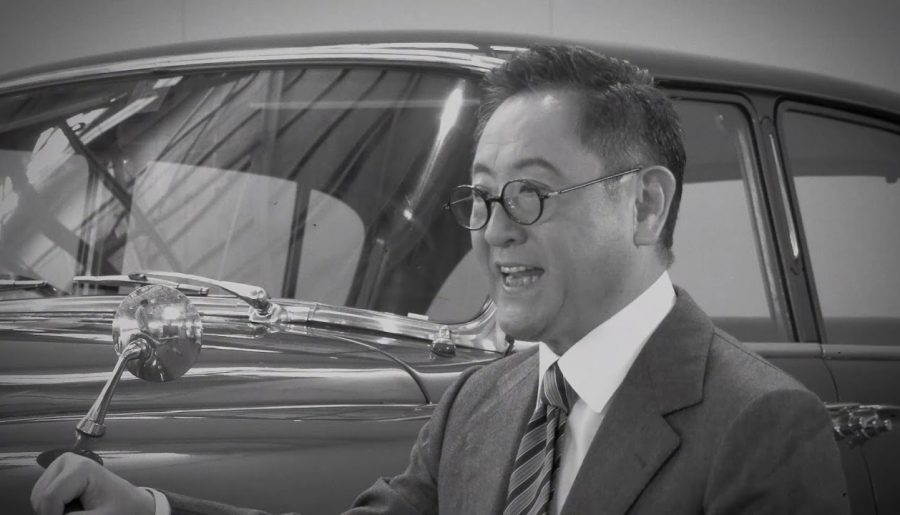 TODAY, LET ME TELL YOU THE STORY OF TOYOTA.

He came from a poor family.

Later in life he created a factory that made textile looms, which are like industrial sewing machines as shown below.

In 1921 he travel to America and was surprised to see all the cars being used. He later toured U.S. automobile factories in 1929. He was certain cars would soon be coming to Japan too. The company later starting making automobiles in Japan. He took apart American cars and learned about each part one by one.

In 1936 he built the first passenger car in Japan called the AA.

Mr. Toyoda, had a lot of logos, but the name Toyota Motor Corporation stuck and was founded in 1937 after the Model AA was built.

The first cars had problems and Mr. Toyota would personally go to each car and fix them himself. This helped him learn the issues better so he could improve the cars in his factory. He always believed that the customer came first and that you needed to personally understand and see what is happening at all times.

How strong are Toyota cars?

Dash201: Once, they dropped one off a 25 story building on a Toyota hill. After they dropped it, the engine was still roaring. There is a 2007 Toyota Tundra that has over one million miles, and it is not uncommon for them to have over 250K miles.

OMG, but  second, how is Toyota so reliable and popular?

Dash201: They use good metal and they create a strong chassis . Also, their frame is very good.

Go Toyota! But… Why did Toyota close the Scion branch?

Dash201: Sob! They had to close it because, sob, they were losing too much money. Younger customers wanted the existing Toyota cars instead.

That’s it for the questions.

They spread out to the USA because they helped during the war.

One of their first models made in the U.S. was the 4runner and Toyota Corolla.

The Highlander is a crossover, and the 4Runner is a SUV.

Did you know that the Toyota Corona was one of the first cars made by Toyota. My dad had one too.

Kiichiro Toyoda restarted his company after the war in1950. The company had a financial crisis that forced him to resign that year. In 1952 he was ready to lead the company again, but Mr. Toyoda died in 1952 at the age of 57. 😢 sob! sob! Sob!

Later in 1957 the Toyopet Crown was mass produced and the first car sold in the U.S. Later they sold the Corolla and Camry in Japan and to other countries. Now, because of his success, Toyota cars roam around the world.

Lexus is actually the luxury car division of Toyota.

Many Toyota models are made in the U.S.

Everyone will remember him as one of the worlds greatest inventors.

Do you know any cool facts about Toyota? Please comment below.