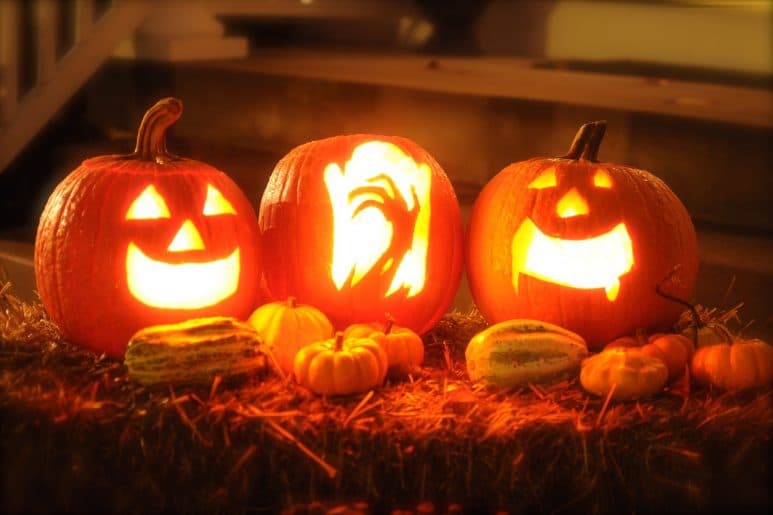 Last time, I shared with you the origins of the widespread custom of Trick-or-treating. And I do hope you enjoyed it! But if you haven’t read it yet, you can do so here on KidzNet.

Now, we’re on part 2 of our Halloween series. Here, we’ll discover the origins of one of the most popular Halloween symbols: the Jack-o’-lantern.

As Halloween approaches, it has already become a norm to see carved pumpkins, commonly called “jack-o’-lanterns,” sitting on front porches. For decades, pumpkins with different grotesque faces illuminated by candles would adorn almost all houses’ doorways and patios.

So how did Jack-o’-lanterns become a symbol of Halloween? Where did this tradition come from?

The practice of the glowing jack-o’-lanterns perched on a porch or in windows originated in Ireland and the Irish folktale about a man named Stingy Jack.

According to the story, Stingy Jack was a known drunkard and deceiver who had met the devil while wandering on the cobblestone path at night. Upon meeting the devil, Stingy Jack realized it was his time to die, and the devil finally came to collect his soul. He made a final request and asked the devil to drink with him before he departed. The devil accepted the request and took Jack to the local pub.

But after drinking, Jack didn’t have money to pay, so he convinced the devil to turn himself into a silver coin to pay the bartender. The devil obliged, but instead of paying, Jack put the coin (devil) into his pocket next to a crucifix or silver cross. This prevented the devil from changing back into his original form and escaping.

This tactic forced the devil to agree to Jack’s demand that the devil would spare his soul for one year and would not claim his soul in exchange for freedom.

The following year, Jack came across the devil again. He tricked the devil for the second time, asking the devil to climb the tree to pick fruit because he was starving. As the devil climbed up the tree, Jack carved a crucifix or a sign of the cross into the tree’s bark. This prevented the devil from coming down. Then, like before, Jack demanded that the devil not disturb him for ten more years in exchange for freedom. The devil agreed as he didn’t have a choice and was set free.

Soon after, Jack died as his drinking took a toll on his body. But as the legend goes, God told Jack that he wasn’t allowed into Heaven due to his sinful and deceitful lifestyle. Jack then went down to the Gates of Hell, but the devil would not allow him there too. This was because the devil kept his word not to claim his soul upon death. He was also still upset by Jack’s dirty tricks.

Instead, the devil sent Jack into the night with an ember of coal to light his way. Jack placed the coal inside the hollowed, carved-out turnip to light his way and was doomed to roam between the two worlds ever since.

This inspired the nickname jack-o’-lantern, as the Irish refer to the ghostly figure carrying a lantern as Jack-of-the-Lantern, or simply jack-o’-lantern.

At the same time, the story also explains the ignis fatuus that commonly occurs in marshlands and bogs in Ireland’s countryside. Ignis fatuus is a natural phenomenon where a glowing, mysterious light that hovers over swamps, marshes, and bogs can be seen at night.  The eerie lights are often caused by the combustion of gas from decomposed organic matter. It’s also known as will-o’-the-wisp, fairy lights, fool’s fire, and jack-o’-lantern.

People in Ireland and Scotland began to make their jack-o’-lanterns by carving terrifying faces into potatoes or turnips. They would place these near doors or into windows to scare the wandering evil souls, especially Stingy Jack.

Irish immigrants came to the United States in the 19th and early 20th centuries and brought their folklore and traditions. In North America, they soon discovered that pumpkins were much better for carving jack-o’-lanterns than turnips or potatoes. Moreover, pumpkins were also common in America. This led to why people would carve pumpkins on Halloween. And as more Americans began celebrating Halloween, the jack-o’-lantern became an iconic Halloween symbol.

Here are some vintage photos of people carving pumpkins for Halloween