KidzNet > Science > The Big Question: Could We Bring Dinosaurs Back To Life? 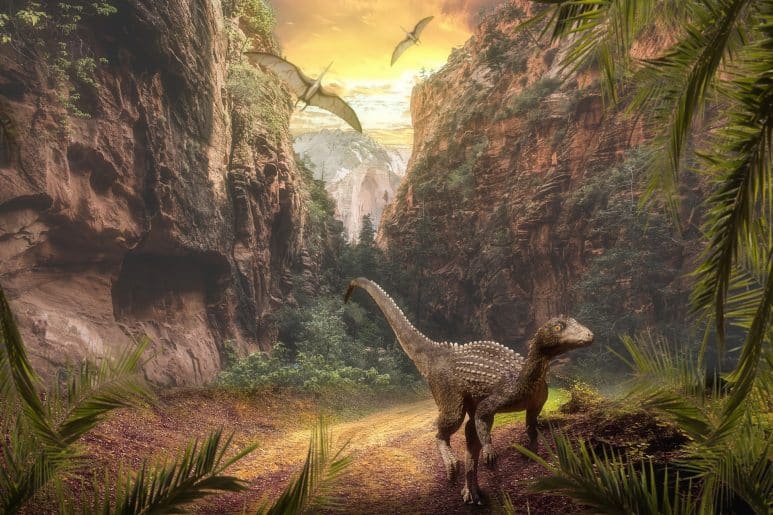 Last time I shared with you a post about the incredible possibility of bringing back an iconic extinct species: the Tasmanian Tiger.

And after reading it, I’m pretty sure this question might’ve already crossed your mind:

How about dinosaurs? Is it possible for scientists to resurrect dinosaurs?

Imagine seeing a real dinosaur! Just like in Jurassic Park movies. That would be awesome, right?

So, can a REAL Jurassic Park eventually happen? Here’s what science has to say.

DNA, which stands for deoxyribonucleic acid, is a complex molecule inside the nucleus of every cell of every living thing—and that includes dinosaurs. DNA contains the genetic code for how an organism will develop, look, and function. In short, it’s what makes an organism what it is.

DNA has two long strands in the shape of a double helix, like two spiral staircases joined and twisted together. These spirals are the DNA’s backbone. In addition, DNA is often referred to as the hereditary material of a body as it’s passed down during reproduction from parents to their offspring.

Many scientists have been trying to resurrect extinct species by sequencing relatively new and well-preserved DNA of extinct creatures. After that, they genetically edit a close living relative’s genome to make it like that of the extinct species.

This is what makes DNA, the genomic molecule one of the most important things that make “de-extinction” possible. And this is the biggest hurdle for the prospect of bringing back dinosaurs.

It’s because DNA breaks down and decays quickly. Studies have found that DNA molecules disintegrate ultimately after about 7 million years. And that’s nowhere near the timeline when dinosaurs went extinct, which was at the end of the Cretaceous Period, about 65 million years ago. So how can scientists recover a well-preserved DNA viable enough to “clone” a dinosaur?

If your a Jurassic Park movie fan, you might be thinking about using dinosaur DNA found in amber like they did in the film. Unfortunately, that is just science fiction and has been proven to not protect the DNA.

Currently, the world’s oldest and well-preserved DNA discovered is more than 1 million years old. It was recovered from two steppe mammoth species, also known as the largest species of mammoth.

Another challenge of recreating dinosaurs is the gestation period or the process of carrying the young in the womb from conception to delivery. Unfortunately, no modern animal could act as an ideal surrogate mother for a young, developing dinosaur.

But what if, perchance, a dinosaur DNA were finally found? The big questions still remain.

What would happen next? Would it be wise to resurrect these long-extinct creatures? And could dinosaurs thrive and coexist with people?

If dinosaurs were to be resurrected today, where would we put them? Of course, like all animals, they need a suitable habitat and food sources that are important for survival. Our world has significantly changed, and it’s far different from theirs. This might cause difficulties for resurrected species to adapt to the new environment properly.

The changes in the world could also greatly impact their roles in ecosystems. They could be potentially invasive, which could affect the animals living in the present day.

By bringing back dinosaurs, they might bring back pathogens and viruses that had also become extinct. This makes us vulnerable, especially since we have no idea how these will affect us.

Also, it’s always been a fact that humans greatly impact why animals went extinct. And based on what’s happening today, it’s quite clear that dinosaurs and people would rarely get along.

The exploitative nature of people would likely kick in and use the resurrected dinosaurs for human purposes (like profit). And if it’s happening right now, who’s to say it won’t happen to de-extinct species?

Lastly, the de-extinction of dinosaurs or any species could put the conservation of currently endangered species on hold or way back. But, it would also show humans that since we can keep their DNA and extract it later to bring them back, why worry and care?

What are your thoughts about this? Do you have any suggestions about where we could still find preserved dinosaur DNA? Do you think it’s a good idea to resurrect dinosaurs? Please vote comment down below and share it with others!