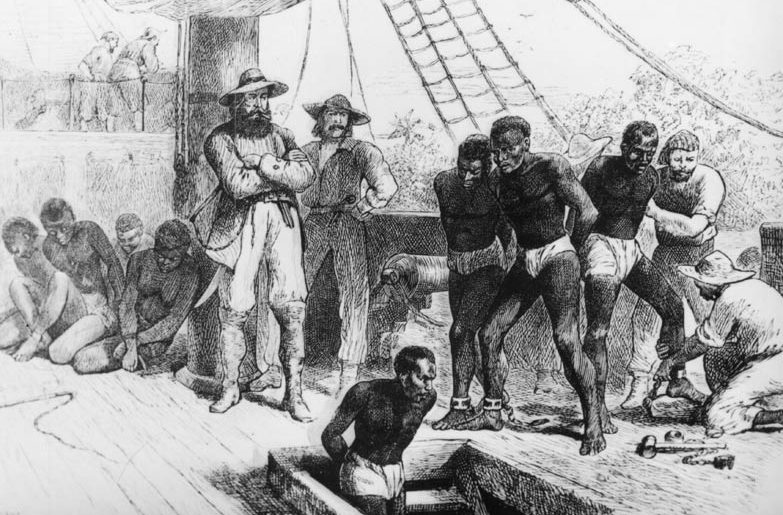 Slavery was a part of life in the United States from its colonial beginnings, and slave owners used forced labor to build the young nation and it is booming economy. By the 19th century, abolitionists were campaigning to free all slaves, in the face of opposition from many American states. This resulted in civil war, with the north fighting to end slavery against the south, who wished to retain it.

The Spanish and Portuguese began shipping Africans slaves to the Americas. Santo Domingo (in modern-day the Dominican Republic) became the first slave port in the new world. By the 1560’s Britain and Holland had joined the slave trade.

Twenty African prisoners arrive in James town in Virginia. Slaves are a cheaper source of labor than contracted servants, who can eventually earn their freedom.

The city of Boston plays a major part in slave trade. The first American slave-carrier ship, Desire, is built here. In 1638, the first slaves are bought to Boston from the West Indies, along with cotton and tobacco.

In Virginia, the General Assembly passes a law stating that any child born to an enslaved mother will also become a slave for life. Most slave-holding colonies or states go on to enact similar laws that discriminate by race.

In Pennsylvania, Quaker’s protested against slavery. The Quakers are Christians, who believe in treating others fairly. Later, the Quaker church prevents members from profiting from the slave trade and from owning slaves.

Rice is introduced in South Carolina. It takes a lot of work to grow, so European settlers need slave labor to tend the crops and help them make it profitable. By around 1710, there are more enslaved Africans in the state than Europeans.

Runaway slaves get their freedom in the Spanish territory of Florida. They must give their loyalty to Spain and join the Catholic Church. Many settle in St. Agustin, the oldest European city in the US.

The first narrative, a story written by an ex-slave about the experience of slavery, is written in New York. Many more slave narratives follow, one of the most famous of which is written by Fedrick Douglass in 1845.

A Quaker family helps start the underground Railroad, a network of safe houses and people who assist runaway slaves. It’s “Grand Central Station” is established in Indiana. As many as 2,000 slaves found freedom there.

The Canadian Attorney General says that all former slaves living in Canada are free and will be protected by the law. Settlers are also not allowed to bring slaves into the country.

The US passes a law that takes the country out of the slave trade. It sends ships to Africa to help rescue slaves from traders and return them to their homelands. However, slave ownership is still legal in most US states.

Born into slavery, Sojourner Truth became a leading Abolitionist and spokesperson for women’s rights. She gives a famous speech in Ohio that highlights the need for rights for black women as well as men.

The novel Uncle Tom’s Cabin by Harriet Beecher Stowe sells many thousands of copies and changes people’s opinion of slavery. Her book helps the Abolitionists’ cause, but tensions between north and south escalate.

The debate over weather or not new states should use slaves split the country in two. Northern victory in this 4 year conflict ends slavery, but more than 600,000 people lose their lives.

All slaves in the south are declared free on January 1st in President Abraham Lincoln’s Emancipation Proclamation. This marks a turning point for the war, as Lincoln knows that ending slavery is the only way to keep the union of US states together.

The Emancipation Proclamation frees slaves but does not end slavery itself. The 13th Amendment of the US Constitution brings a permanent end to slavery in all the United States including new territories.

Four million slaves were freed, but the challenges for African Americans remained. Lincoln had announced plans to help the south rebuild, but his assassination meant that his plans were never realized. Southern states went on to introduce laws to limit the civil right of African Americans.