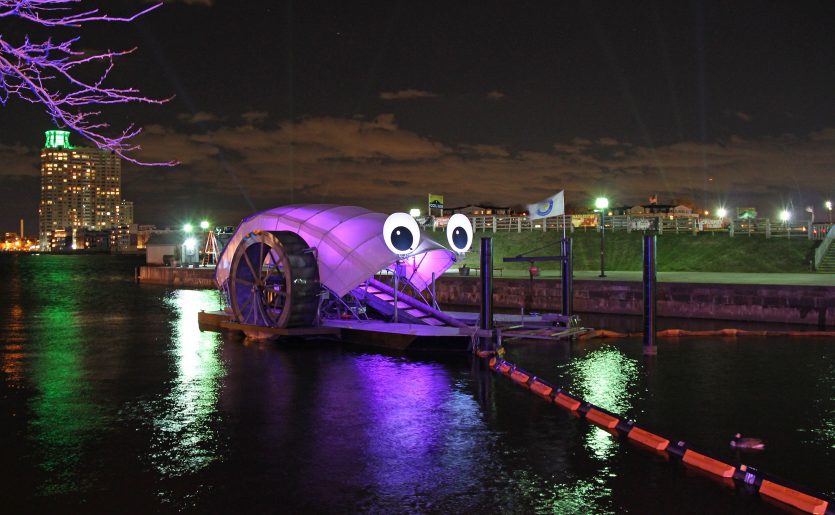 Humans are generating and dumping too much trash daily, posing as one of the biggest known environmental threats. And to think that this has been a continuous battle for decades now.

Waste or litter finds its way into the ocean and other waterways, affecting water quality, polluting our environment, and spreading diseases, viruses, and parasites.

Trash also affects innocent animals, especially sea animals, every day. Millions of animals die yearly after being entrapped or ingesting improperly discarded waste. Aside from that, garbages are being washed away into waterways by storms, accumulating even more trash.

So how can we clean up our act and prevent the ceaseless pollution on our planet?

Fortunately, an innovative device has been helping to stop garbage by removing them from rivers before they get into the oceans.

Mr. Trash Wheel is a trash interceptor that collects and removes trash or other floating debris before they flow into a harbor or ocean. This floating machine is based in the Jones Falls stream of Baltimore’s Inner Harbor in Maryland.

John Kellett, the founder of Clearwater Mills, a local logistics company in Baltimore, invented this amazing floating machine in 2008 and launched its pilot vessel at that time. On May 9, 2014, it was later developed into a larger machine, replacing the pilot vessel. He developed the idea after seeing the abundance of trash flowing into the harbor on his walk to work after it rained.

Mr. Trash Wheel is a 50-foot-long trash interceptor weighing over a hundred pounds. It has large googly eyes attached to its hood and resembles a giant friendly mollusk.

You might be wondering how Mr. Trash Wheel works…

Mr. Trash Wheel is powered by flowing river water to generate electricity (hydro-powered) by turning the large water mill (14 feet). This floating machine also uses solar panels as backup power when the river isn’t flowing fast enough to turn the wheel. This water wheel is the one that powers Mr. Trash Wheel’s rakes and conveyor.

After all the trash has been contained, it’s time for Mr. Trash Wheel to rake and convey them. As this floating machine is powered by the river current and sun, the waterwheel turns a large conveyer belt on and the powered rakes lift the trash out of the water and onto the conveyor belt.

Although Mr. Trash Wheel’s conveyer belt moves slow, it’s strong enough to scoop anything, even tires or trees. Once the trash reaches the conveyor belt’s top, it goes into a dumpster, and after it’s full, the dumpster is towed away and replaced with an empty one. Mr. Trash Wheel also has an internet connection so John Kellet can monitor what’s happening via webcam and take action if needed.

For the time being, what Mr. Trash wheel does with gathered trash is incinerated to create electricity for Maryland homes. But they also hope, eventually, that the gathered trash will instead be sorted and recycled.

Years later, after its installation, Mr. Trash Wheel is now accompanied by his family/relatives. They are Professor Trash Wheel℠, Captain Trash Wheel℠, and Gwynnda the Good Wheel of the West℠.

Professor Trash Wheel was installed on December 4, 2016, at is now helping clean Harris Creek in the Canton neighborhood of Baltimore, MD.

Captain Trash Wheel was installed on June 5, 2018, and is currently based on Masonville Cove in Baltimore, MD.

The latest addition to the Mr. Trash Wheel Family is Gwynnda, the Good Wheel of the West, which was only installed on June 3, 2021. Gwynnda is currently helping clean the Gwynns Falls, West Baltimore, MD.

Here is an important note – Mr. Trash Wheel doesn’t harm animals, so he’s kind of become a refuge or shelter for animals seeking a safe place. There’s one instance when a mother duck laid its eggs under  Mr. Trash Wheel’s conveyor belt.

Mr. Trash Wheel became a popular social media hero and a city attraction. He even has his own Twitter and Instagram accounts with over 20 000 followers. People often visit Mr. Trash Wheel, taking selfies while helping spread the word about preserving a clean and sustainable environment. They also have a popular slogan, “Don’t Feed Mr. Trash Wheel,” which helps bring awareness to littering and pollution problems. However, Kellett doesn’t see The Trash Wheel concept as the cure to the continuous plastic and litter problem. Instead, it’s only treatment of a symptom, meaning it’s still important to fix the root cause of it.

As of now, there are current developments about installing Mr. Trash Wheel’s versions in Brunswick, Georgia, Panama City, Panama, and Newport Beach, California.

Before I end this article, here’s some fun fact about the Mr.  Trash Wheel Family.

According to their website, Mr. Trash Wheel likes pizza boxes the most, pythons, and Star Wars (even the prequels). On the other hand, he dislikes ducks, single-use plastics, and fatbergs.

What Captain Trash Wheel likes the most are big ships, bird watching, and the reuse of dredged materials. On the other hand, he dislikes gender-specific pronouns, sedimentation, and cloudy days.

Lastly, Gwynnda, the Good Wheel of the West (who seems to be the princess among the family), likes Hermione Granger, Erykah Badu, the Wizard of Oz, Ouija Boards, TLC, astrology, and anything purple.

What are your thoughts about this? Do you have any ideas to help prevent litter pollution? Please comment down below to share them with others.