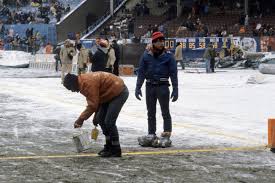 On New Year’s Eve- December 31, 1967, the Green Bay Packers were on the field against the Dallas Cowboys at Lambeau Field, Green Bay, Wisconsin. At the stadium, the temperature was -15F degrees but it felt like -48F.