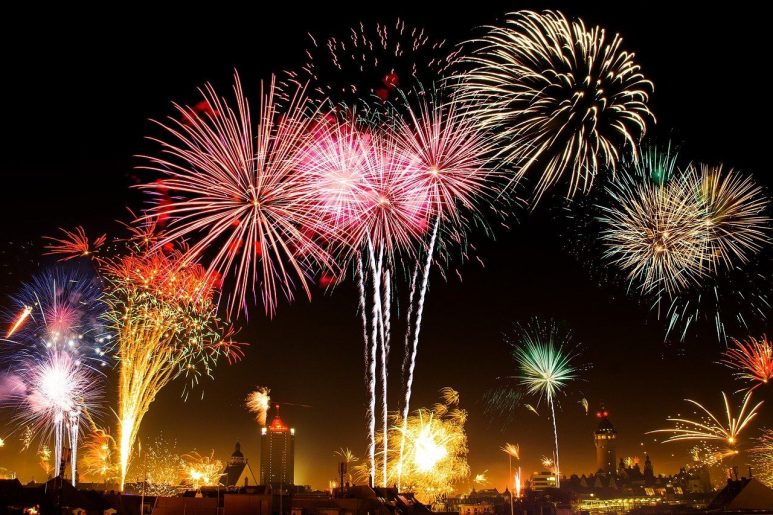 The New Year marks a time when a new calendar year begins, bidding goodbye to the old one. The festivities usually begin on the evening of December 31st for most countries, which is the last day of the Gregorian calendar, also known as New Year’s Eve. However, as we will see, different countries and cultures may celebrate at other times.

Many people around the world celebrate the holiday by joining New Year countdown parties, eating a New Year’s feast with families and friends, watching grand fireworks displays, looking back and reflecting on past resolutions, and even making new ones. These traditions are often observed as a way to bring success and luck in the upcoming year.

But did you know that many countries celebrate the event in their unique way, carrying out different traditions and customs of their own? Let’s take a look at some of New Year’s traditions around the world.

One of the most popular New Year traditions observed in the United States is watching the New Year’s Eve Ball Drop, which began way back in 1907. The first Time Square Ball was 5 feet in diameter, weighed 700 pounds, decorated with a hundred light bulbs, and was made of wood and iron. Today, the huge ball is 12 feet in diameter, weighs 11,875 pounds, and is adorned with thousands of Waterford Crystal triangles.

It’s also a tradition for some couples in the United States to share a kiss at midnight, also known as the New Year’s Eve kiss! This tradition is believed to signify good luck and prevent loneliness for the rest of the year. People also believe that if a couple kisses at midnight, their bond will be stronger.

Listen to the Queen’s speech (Denmark)

It has been a tradition for Danes to listen to the Queen’s speech, a live broadcast that starts at 6 pm on New Year’s Eve from Fredensborg Castle north of Copenhagen. The Queen commonly signs off with her famous line, “Gud bevare Danmark” or “God save Denmark.”

Once the clock strikes midnight, Danes then sing the national anthem while sipping champagne, indulging in their New Year’s traditional dishes of Cod and Kransekage, and watching the Dinner for One, also known as The 90th birthday, a comedy sketch aired every New Year’s Eve.

Danes also jump off a sofa or chair as it signifies good luck to leap into the New Year, and they smash plates or porcelains in each other’s doors as a sign of luck, friendship, and affection.

Rosh Hashanah, the Jewish New Year, is referred to as the First of the Year or The Head of the Year. It occurs on the first day of Tishrei, or the seventh month on the Hebrew calendar. The day it’s celebrated varies, depending on what day it falls on, but is often celebrated in the month of September.

Rosh Hashanah marks God’s creation of the world and begins at the blowing of the shofar, a musical instrument made of a ram’s horn, which signifies the cry for repentance. Other customs include eating slices of apple dipped in honey, women lighting candles each evening, reciting kiddish (Jewish prayer) over wine or grape juice, and greeting each other with “L’shana tovah”, meaning “For a good year.”

On December 30th, the Torchlight Procession, a festivity celebrated with people carrying lit torches, holding large bonfire ceremonies, and rolling tar barrels takes place on the streets of Scotland’s capital, Edinburgh. For the Scottish, the ritual of using fire signifies burning of the past, cleansing, and welcoming new beginnings.

After the bell has struck midnight, Scots will sing Auld Lang Syne to welcome Hogmanay, the Scottish name for New Year. Other Hogmanay traditions include the “First footing”, a custom of visiting people’s homes on New Year’s Day with a symbolic gift of coal, wood, black buns, coins, or whisky. It’s considered lucky if the first footer is a tall, dark-haired man.

On January 1st, Scots celebrate Hogmanay by joining their annual Loony Dook where people dress in costumes and plunge into the freezing waters!

Lunar New Year in China is also known as the Spring Festival, which is celebrated for fifteen days—from Chinese New Year’s Eve until the Lantern Festival. The date it’s celebrated varies as it is determined by the Chinese Lunar Calendar. It is usually celebrated in January or February.

The preparations begin by cleaning the house, decorating the house with red things, and doing New Year shopping. The color red is important for this festivity as it symbolizes prosperity and is believed to ward off negativity and evil spirits.

They eat fish to symbolize prosperity because the sound of the Chinese word fish is the same as extra money. Chinese dumplings are also very popular and they often eat other special dishes each day. Families hang New Year words with red signs on their front doors and windows.

The Lion and Dragon dance symbolizes strength and is performed to bring good luck and prosperity for the upcoming year.

Around midnight on Ōmisoka or New Year’s Eve in Japan, Joya no Kane, a Buddhist ritual, is observed by ringing a temple bell 108 times. The ringing of the bell symbolizes the 108 worldly desires in Buddhist belief and getting rid of them.

Hatsumode, or visiting a shrine or temple is also one of the traditional New Year’s customs. Many people visit on the 1st, 2nd, or 3rd of January to pay respects and pray at the altar. The custom involves throwing coins into a box, ringing the bell using a rope, bowing twice, clapping hands twice, and bowing one last time.

A Time For Reflection

When the clock strikes twelve, New Year’s celebrations look unique around the world due to diverse traditions, customs, and not to mention different timezones. The traditions mentioned above are just some of the special rituals observed.

The New Year is important. It’s not only about celebrations, but also a time for reflection and resolutions. It instills luck and positivity as we venture on a new beginning and look forward to future possibilities for the upcoming year.

As another year draws to a close, what better way to welcome a new year and new beginning, by also raising our glasses and celebrating how far we have come.

Do you have any special traditions for celebrating the New Year, or any New Year´s resolutions? Please comment below.