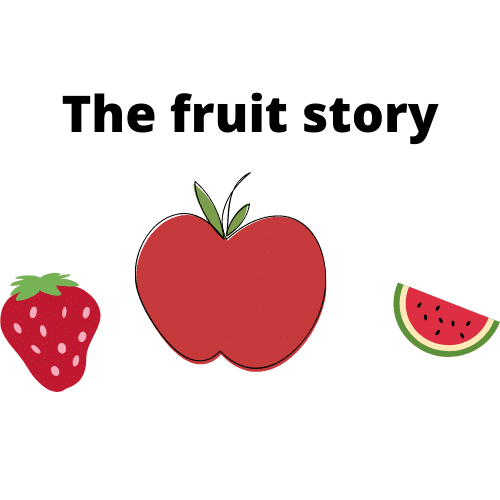 Once upon a time, there were 3 fruits: Kiwi, Apple and Orange. They were smart and clever.

One day, they arrived at the beach, The saw a big, empty new house. They thought that it was a free house, but they didn’t check the poster on the house. It said that the house was on sale and for viewing. After they walked inside and saw people. Kiwi said: run!

But Apple, who was the biggest, said, let’s disguise ourselves on the table. While that happened they met new friends, Dpad, DComputer, Dtop and Dphone. They were a great help while they were in the house. After, when they saw the humans coming, they ran away and rammed the door. The door fell into the lake with them on it. They were really frightened.

After a few days they arrived in Algonquin, a real national park in Canada. When they arrived they made the door a house by kiwi’s Super Intensive anything remote (that he made by himself). Dtop said “wow!” after looking at the invention. Kiwi made a 2-story house with a small room for 6 to fit in and a kitchen.

When they entered Algonquin they were attacked by a lion, but they ran away, and they didn’t get hurt. After that, they made the house even bigger to 3 stories. It had a fruitpool (a swimming pool for fruits) on the roof. They added a living room for watching TV and a balcony to keep an eye on humans.

They increased the house’s security system. After that they went to Paris and met the fruit colony. The fruit colonies boss, Strawberry said that we have no home. Then kiwi said if you help build our house then you can live in it. Then the fruit colony all said “ok”. Soon they upgraded the house with 6 stories. They made 2 more big bedrooms, 2 big bathrooms, 1 powder room, and one arcade (where the kids play games).

The fruit colony had 10 members, Strawberry, Watermelon, Jr. Watermelon, melon, jackfruit jr, Grape, Clementine, Pineapple jr, Lemon jr, and Mango jr. They all played 13 player ludo. They were a happy family until the government of Paris tried to attack them.

A little of their stuff was broken. Most of them were good as new. But the children were really scared. They were crying. The adults tried to calm them down. It worked. One day a poor child flower was in the snow. She was shivering. Strawberry saw her and said “what are you doing in the cold?”. “My parents left me here, and they said they would take me back”.

But they lied. I was here for 4 days. Strawberry said, “Would you like to live with us”?

She Said “Yippee!”. But Unfortunately, she fainted. Strawberry brought her home and saved her.

One day Watermelon Jr. was lost. Watermelon said “Help, Help!” “Watermelon Jr. is lost!” When they heard this they rushed to their Invisivan. Dpad was the driver. He used his Fruitrack to find Watermelon Jr. Luckily they found them under the Eiffel Tower. He was crying and shivering. They took him and bought him some toys of his choice. His favourite toys were Beyblade burst evolution. They all played with it.

After a few weeks, 3 countries were preparing to attack them. The fruits were ready with their missiles and mini tanks. They fought hard while the sky was gloomy and it started to rain. Likewise, they took back all the weapons and made their big house a rocket and flew off with all their belongings. Not only that, but they arrived on Mars. When a few years passed  Elon Musk came. He saw the fruits and tried to kill them. Their strong defense killed him and his son wanted revenge.

The news was filled with havoc. They invited Elon Musk’s son in the news. He wanted  revenge, so he went to kill the fruits. But when he saw missiles he was so scared he escaped and his mission was a failure. The Fruits met a good wizard on Mars and lived happily in safety.

This is the END. Bye.