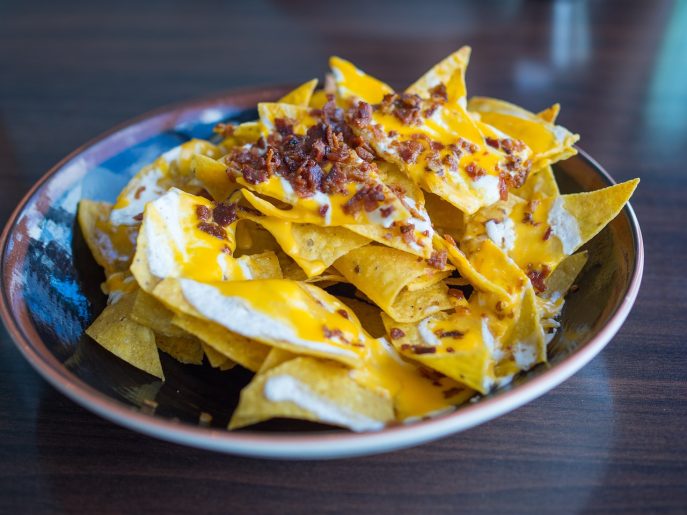 November 6th is National Nachos Day! This day celebrates everyone’s favorite snack. How do you like them? Chicken or beef? Beans or salsa? Cheddar, or that yellow stuff you put on chips at football games? Nachos are just chips and a pile of cheese as the two main ingredients with no specific recipe.

So I thought of writing a post about Nachos for KidzNet…

Any discussion of nachos history must begin in Piedras Negras, a Mexican border town just west of the Rio Grande River across from Eagle Pass, Texas. One day in 1943, the wife of an American soldier on duty at Fort Duncan visited a hotspot in Piedras Negras called the Victory Club.

Unfortunately, the restaurant was closed that day.

Nevertheless, the manager, Ignacio “Nacho” Anaya, decided to use the leftover ingredients to create a dish. Among the leftovers were cheese and tortillas. Anaya cut fried tortillas into triangles, added grated cheddar cheese, and some jalapeños peppers. This started a new tradition that still bears his name today. (Thank you, Nacho! Where would a Super Bowl party be without you!)

The first sports arena to sell nachos was at a Texas Rangers baseball game in Arlington Stadium in 1976. Some alternative versions of nachos came later. After that, Legendary ABC sports reporter Howard Cosell mentioned the term “nachos” during a Monday night football game, helping make this simple dish an American tradition.

1978
Monday Night Nachos
Famed sports commentator Howard Cosell announced to an entire nation a new snack he was enjoying during the Baltimore Colts vs Dallas Cowboys game, making it a household word.

2019
Sports Tribute
“Walkoff Nachos” get added to the Astros’ World Series menu as a tribute to Jose Altuve’s walkoff home run that gave the club the American League title.

If you are a Nacho Lover, what can you do on this day?? Check below for some options!

1) Host a Nacho contest
They have chili contests, barbecue contests, and even baking contests, so why not have an annual nacho contest? Well, you’ll be happy to know that at Port Jefferson station in New York they host the annual Nacho Festival, but you don’t have to go there to experience it! With so many ways to serve this crispy culinary masterpiece, invite some of your most talented tortilla masters to the table with their best recipes.

2) Visit your local cinema
At this point, nachos have become a popcorn-like staple. Instead of popcorn, when you get to the theatre food stand, make a plate of hot, mouthwatering nachos to be the star of the show. Don’t forget to add cheese!

3) Perfect the Chips to Cheese Ratio
One downside that many people notice about nachos is that you can only cover so many tortillas with cheese. In the end, you are left with the bottom tokens, which could have also been left in the bag where you found them. Don’t worry, this can be prevented. Next time, put these chips on a cookie sheet and set them out. Coat each chip with cheese and bake.

WHY I LOVE NACHOS NATIONAL DAY

Are u a Nacho Lover? I am!! Here is why I like this day? Check whether you have the same reasons for liking nachos as me.

1) They’re perfect for any party
Is there any party where nachos aren’t welcome? Seriously, Super Bowl, 4th of July, birthday – if you bring your nachos, you can also wear a cape while there because you just became the hero of the party! You can also prepare salsa and make a bold statement!

2) They can be topped with just about anything
It’s not necessarily all about guacamole and hot sauce. You can make nachos to suit any cooking style. How about giving your nachos a bit of a Mediterranean twist by adding pita chips and hummus? Fan of Italian cuisine? Try topping it with marinara and mozzarella! The possibilities are limitless.

3) They can be a snack or a main meal
It’s hard to sort out what nachos actually are. Some would have you believe they’re just a snack, but with all that topping, how could it not be a meal? That’s the great thing about nachos, they can be a complete meal or a snack. Perfect for lunch or dinner. And nachos also require just one fried egg to become a breakfast staple!

I hope you learned something useful about Nachos from this post.

Jason (you may also know me as Alex)