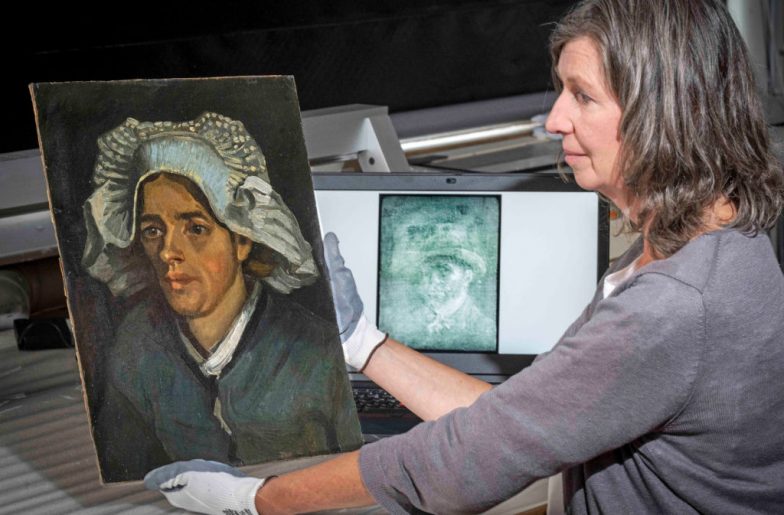 A previously unknown self-portrait of Vincent Van Gogh was discovered hidden behind one of his early paintings in The National Galleries of Scotland’s collection.

Vincent Van Gogh is a Dutch painter considered one of the greatest and most influential Post-Impressionist artists of all time.

The National Galleries of Scotland discovered the self-portrait of Van Gogh, which had been hiding in plain sight for more than a century. It was covered by layers of cardboard and glue behind an earlier work called Head of a Peasant Woman (1885).

According to the curators, the X-ray image showed “a bearded sitter in a brimmed hat with a neckerchief loosely tied at the throat. He fixes the viewer with an intense stare, the right side of his face in shadow and his left ear clearly visible.”

The “Head of a Peasant Woman” painting is a portrait of Gordina de Groot. She was a farmworker, one of the working-class Nuenen residents in a small farming community in the southern Netherlands, where Van Gogh lived from December 1883 to November 1885. The painting came into possession of the National Galleries of Scotland (NGS) when Alexander Maitland, an Edinburgh lawyer, donated it as a gift in 1960.

The mysterious image was uncovered by art conservators using an X-ray as they examined Van Gogh’s “Head of a Peasant Woman” painting. The process was in preparation and as a cataloging exercise before being displayed in a forthcoming Royal Scottish Academy’s summer exhibition of French impressionism. Van Gogh will be included in the collection even though he was Dutch, as he spent much of his time and artistic career in France.

Experts believed that the layers of materials were applied, and the canvas was stuck down on cardboard before being framed in 1905. It was presumably back when the “Head of a Peasant Woman” painting was lent to an exhibition at Stedelijk Museum, Amsterdam. Experts also added that the curators before may have considered the “Head of a Peasant Woman” to be more “finished” than the now hidden Van Gogh’s self-portrait.

Van Gogh was also known for reusing canvases to save money. In this case, he worked on the reverse instead of painting over his earlier works. Further research also pointed out that this hidden self-portrait could be one of Van Gogh’s experimental self-portraits. He would often paint his self-portraits because he wanted to practice painting people. At that time, he struggled to find models, and he was short of money hence the simplest solution⁠—painting himself.

Here are some examples of van Gogh’s self-portraits:

Experts at the National Galleries of Scotland gallery believe it’s possible to uncover the hidden self-portrait. However, the process of removing the glue and cardboard requires delicate conservation work, so research is still ongoing to find how it can be uncovered and restored without damaging the Head of a Peasant Woman.

This discovery is important as it will help experts gather more information about Van Gogh’s life.

Visitors can publicly see the  X-ray self-portrait image at the “A Taste for Impressionism” exhibition through a specially-crafted lightbox at the Royal Scottish Academy in Edinburgh from July 30 to November 13.

Before I end this post, here are some facts about Vincent van Gogh you should know:

You can visit the Van Gogh Museum website to discover more about Vincent van Gogh’s life and works.

What are your thoughts about this? What other interesting facts about Vincent van Gogh do you know? Please comment below!