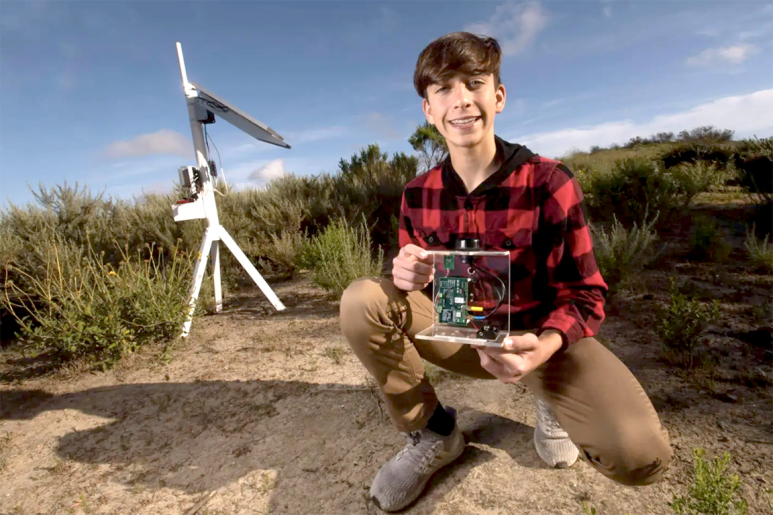 When you hear the word hero, what’s the first thing that comes to your mind? A police officer, firefighter, or maybe a doctor? Or perhaps it’s what you usually see in movies or television? A person with superpowers, a cape, and a mask?

But what if I tell you that anyone can be a hero, including yourself? Even if you’re young or old, a girl or boy, you can be a hero too because heroes come in all forms.

Let me tell you about an inspiring story of a 14-year-old boy who has been making a big difference in his own way: by inventing a groundbreaking AI-driven (Artificial Intelligence) wildfire prevention technology.

In 2018, Ryan was traveling in Arizona when he witnessed images of the devastating Camp Fire, the most destructive and deadliest wildfire in the history of California. The wildfire had destroyed over 18,804 structures, burned 153,336 acres, and killed 85 people with several firefighter injuries.

Witnessing this horrendous casualty was what inspired Ryan to develop an AI-driven wildfire prevention system, which helps avoid the spread of wildfire by detecting it at its earliest stages and then informing people. This technology would also help predict and prevent wildfire and other catastrophic events in the future. He was a only a fifth-grader when he developed this.

Ryan’s AI-driven wildfire prevention system, also referred to as the Machine Learning (ML) sensor network, consists of a network of fire detectors and mini meteorological stations. Along with his network, he created an app with it using JavaScript, which is a computer language.

His wireless system has networking sensor groups, or what he calls a mini-meteorological station, which has nodes that are used to communicate things like smoke information, or heat to each other. The information passes from one node to another in the mesh network, and then gets sent to his created app.

Honary trained his Machine Learning (ML) models to capture data about wildfires by using real-world data about the 2018 Camp Fire in Northern California from Google Earth.

In 2019, Honary presented his creation in the Ignite Innovation Student Challenge, a national contest for Grades 6 to 8 on creating a digital solution that may solve problems in areas of Planet, Health, or Education. Honary won the Grand Prize at the TCS Ignite Innovation Student Challenge with a $10,000 award. He also established the Early Wildfire Detection Network and was named American Red Cross Disaster Services Hero for Orange County in 2020.

In 2020, Honary also won the Naval Science Award from the prestigious Office of Naval Research (ONR) after presenting his AI, and received total funding of a nearly $2 million grant. This presentation also led to him building SensoRy AI, which is Honary’s own company.

Honary believes his device could also be used for early detection of environmental disasters, such as underwater oil leaks, methane gas leaks, water contamination, and many more in the future to help preserve the environment.

What are your thoughts about this? If you were to invent a device that would help the environment and other people, what would it be? Make sure to comment down below to share it with others.