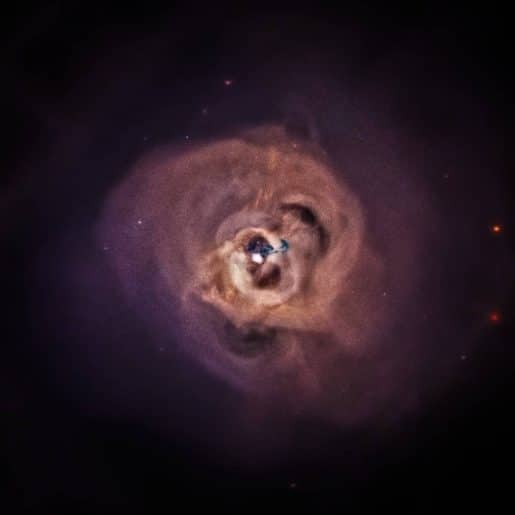 Want to hear it? Don’t worry. NASA has you covered.

On Aug. 22, 2022, NASA released a 34-second audio clip of sound waves emanating from a supermassive black hole. And let me tell you, it sounds amazing yet ominous and creepy at the same time.

So what does the black hole recording sounds like? Listen to this video.

The black hole is located at the center of the Perseus galaxy cluster, which is more than 240 million light-years away. It’s also known as one of the galaxy clusters closest to Earth.

It has always been a common thought that space has no sound. But contrary to popular belief, this idea is untrue. Most of outer space is basically a vacuum that doesn’t allow sound waves to travel. However, the galaxy cluster Perseus has so much hot gas that it serves as a channel for sound waves to travel through. This became the way for scientists to pick up the black hole’s actual sound waves.

Scientists have associated the black hole at the galaxy cluster’s center with sound since 2003. And this was when they first discovered that the black hole sends pressure waves, which causes ripples in the Perseus galaxy cluster’s hot gas. And these ripples could be translated into a note. However, the note is 57 octaves below middle C, which is impossible for humans to hear.

Now you may be wondering how exactly they captured the sound in the place.

Since the human ear can’t pick up the note emanated by the black hole, scientists used the sonification technique that translates celestial data into sound.

The black hole’s sound waves identified nearly two decades ago by Nasa’s Chandra X-ray Observatory were extracted and raised to make them audible to humans. They raised the black hole signal’s octaves to 57 and 58 octaves above their original pitch. So the sounds you hear are about 144 quadrillions and 288 quadrillion times higher than their original frequency.

The audio clip captured people’s attention, and many pointed out it sounds like the ‘Om sound,’ which is the primordial sound of the universe, according to the Hindu Scripture. This mantra is also often traditionally chanted at the start and end of meditation.

Some say it sounds absolutely haunting, like deep moans from ghosts or thousands or millions of souls are humming in unison.

Others say it’s exactly how they imagined a black hole would sound like.

What are your thoughts about this? How does the blackhole recording sound to you? Comment down below and share it with others!