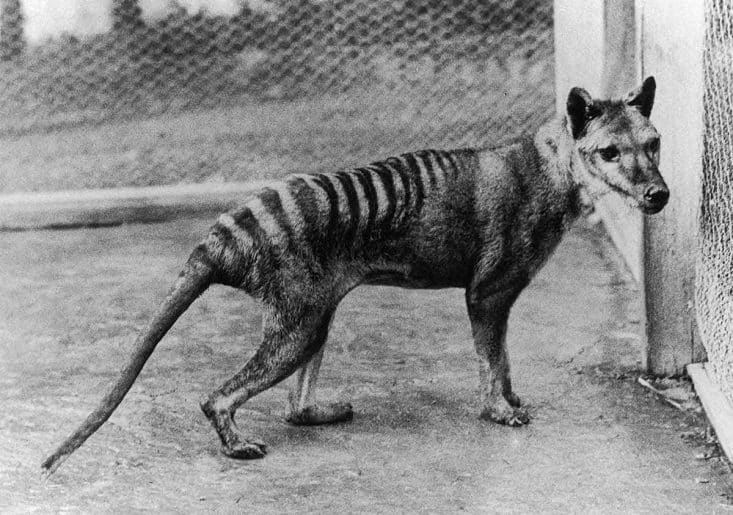 It’s a sad reality that many species have gone extinct and many are currently on the brink of being wiped out.

One thing we do know, though: aside from degradation and loss of habitat and climate change, humans are a big part of why animals go extinct. From hunting, over-exploitation, overharvesting, and polluting natural habitats, humans are indeed driving animals to extinction.

The woolly mammoth, dodo, western black rhinoceros, Steller’s Sea Cow, and the Tasmanian tiger are among the animals whose population has diminished.

But thanks to genetic engineering and biotechnology, the prospect of “de-extinction” or bringing back extinct animals may not be as far-fetched as it used to be. (Think of the movie Jurassic Park)

Researchers from the University of Melbourne aim to resurrect the Tasmanian tiger, a marsupial apex predator that went extinct in the 1930s. They partnered with Colossal Laboratories and Biosciences, a bioscience and genetic engineering company.

Colossal Biosciences was founded in 2021 by George Church, an American geneticist, and Ben Lamm, an American tech entrepreneur. The company is also currently working on its $15 million project to genetically resurrect the woolly mammoth.

The Tasmanian tiger, also known as Thylacine (Thylacinus cynocephalus), is native to Australia, Tasmania, and the New Guinea islands. It was the largest carnivorous marsupial in the world. It gained its nickname, Tasmanian tiger, because of the distinctive stripes along its back and its appearance resembling a canid or the dog family.

Although the exact reasons why the Tasmanian tigers became extinct are unknown, it was believed to be because of excessive hunting, disease, and habitat destruction.

In 1830, the Van Diemen’s Land Company introduced a bounty scheme for their skins as Tasmanian tigers were considered pests by farmers. And in 1888, the Tasmanian Government issued another bounty: £1 (pound) per full-grown thylacine and 10 shillings per young one.

In 1909, the bounty was dismissed, but the thylacine species were already on the brink of extinction. Between 1830 and the 1920s, there were around 3500 thylacines killed through hunting.

The last known Tasmanian tiger named Benjamin died inside his cage at the Beaumaris Zoo in Hobart, Tasmania, in September 1936. It was just two months after the thylacine species was granted protected status.

You might be wondering, “How will the project resurrect the extinct Tasmanian tigers?”

Scientists will use gene editing technology and build artificial wombs.

First, they will take cells from the Tasmanian tiger’s closest living relative with similar DNA, the fat-tailed dunnart. Then, after taking the living cells from the dunnart, the scientists will use CRISPR gene editing technology to change the dunnart cell to thylacine cells.

Once they have changed it, they will turn the cell using reproductive techniques to create an embryo. And these embryos would either be placed in an artificial womb or have a dunnart carry the embryo as a surrogate mother.

However, other scientists don’t agree as a ‘hybrid’ Tasmanian tiger will be poorly equipped to survive in the wild because of the changes. Others have also expressed concern about how the animals used throughout the project will be treated.

In addition, other experts also question why we should spend millions on de-extinction projects when we could help living animals that are on the brink of extinction instead.

What are your thoughts about this? Do you think we should bring back extinct animals? If so, what would you resurrect if you had the power to do so? Please comment down below and share it with others!