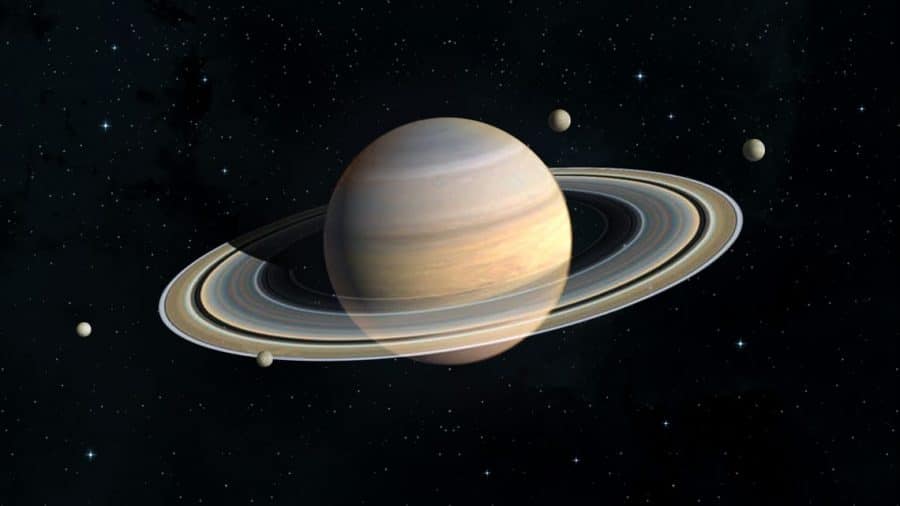 Saturn is a gas giant or a colossal planet mainly composed of helium (He) and hydrogen (H2). It’s the sixth planet from our Sun and the second-largest planet in the solar system.

Among the planets in our solar system, Saturn is considered the most beautiful. This is because of its thousands of unique, glorious rings around it.

This majestic planet has seven rings and several divisions and gaps between them. These rings are made of billions of small chunks of ice and rock coated with dust. Some fragments are as small as specks, and others as enormous as mountains!

The main rings are named alphabetically in the order they were discovered: A, B, and C. The more recently discovered and fainter rings are D, E, F, and G.

Saturn may not be the only planet with rings, but none is as stunning or complex as Saturn’s ring system.

Now you might wonder where Saturn’s magnificent rings came from and how they were formed.

We might have the answer to this mystery now.

According to scientists, Saturn’s well-known magnificent rings could be from an icy moon ripped apart by the planet’s powerful gravity. Research data from the final stage of NASA’s Cassini spacecraft suggested that Saturn may have existed without rings for 4.5 billion years. However, an inner moon could have wandered too close to Saturn about 160 million years ago and was pulled apart into tiny pieces by the planet’s gravity.

The Cassini spacecraft was sent on October 15, 1997 (about 20 years ago) to study the wonders of Saturn, its ring system, and family of icy moons.

The theoretically destroyed moon has been nicknamed Chrysalis, just like a butterfly’s Chrysalis. Scientists stated that the lost moon could be compared to a caterpillar laying dormant in its chrysalis phase and then revealing and flapping its wings — hence the name.

“Similarly, this was just a small moon made of ice, and then the rings suddenly emerged when it was ripped apart.”

Additional data from the Cassini spacecraft also proposed that this extra moon could have been located between Iapetus and Titan, both Saturn’s moons.

Scientists also proposed that this theory about the Chrysalis moon could explain why Saturn is tilted by about 27 degrees on its axis. They suggested that Chrysalis entered Saturn’s orbital zone and had close encounters with Iapetus and Titan. Unfortunately, the moon eventually came too close to Saturn and violently pushed the planet out of resonance, or gravitational association, causing the rings and tilt.

Researchers tried to perform 390 simulations of the Saturn system, along with Chrysalis. They found out that 17 of the results approximately matched the planet’s system we see now, rings and all.

However, according to scientists, although the theory sounds promising and fascinating, it’s still difficult to prove.

What are your thoughts about this? Do you have other fun facts about Saturn’s rings? Comment down below and share them with others!